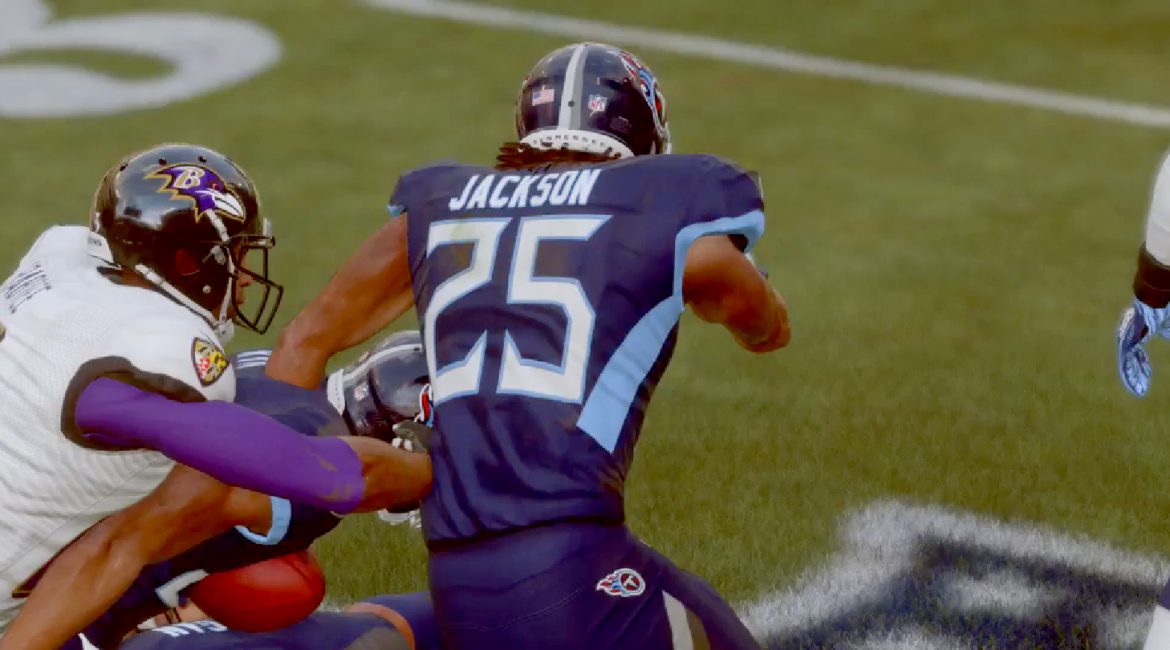 Nashville, TN – Tennessee Titans Head Coach Nicholas Franklin may have summed it up best in his post-game press conference: “You don’t win games when you turn the ball over six times, but sometimes you don’t lose them either.” The coaches frustration was written all over his face as he recapped poor ball handling, miscommunication on offense and defense, multiple inopportune fouls, and of course a dreadful performance by usually reliable Marcus Mariota at QB. Despite all of it, the home crowd got to see a win when final minute heroics would cap off a 31-27 victory over the visiting Baltimore Ravens.

This week saw the return of pro-bowl left tackle Taylor Lewan to the lineup, allowing the rest of the line to return to their normal positions. Lewan had been sidelined for 4 weeks. It was a good showing as well as they only allowed 1 sack of Mariota and paved the way for Derrick Henry to run for over 100 yards again on 26 carries.

But the real story here, was the mishaps by both teams. Combining for 11 turnovers, 6 for the Titans and 5 for the Ravens, it was absolutely embarrassing to watch at times. Mariota would throw 3 interceptions and appeared unable to read the Ravens coverage’s at times and would simply not see defenders guarding the passing lanes. Two of those interceptions would even come in the first quarter of play as Mariota would start the day. Combine that with one fumble off a bad pass where Mariota’s arm was hit by his own lineman resulting in a backwards pass scooped by the Ravens,  a swing pass that hit David Fluellen square in the back, and one coughed up ball by Henry late… it was the worst offensive showing of the year for the Titans.

Fortunately, the Nashville defense equally terrorized Joe Flacco and the Ravens. Malcolm Butler, Adoree’ Jackson & Brynden Trawick would all get interceptions on the day, and Wesley Woodyard would scoop a DaQuan Jones forced fumble and take it to the house. Adoree added a fumble recovery on the day off a forced fumble by Derrick Morgan to his interception.

Despite the ugliness, the game late provided some excitement as the Ravens drove down the field with the game tied at 24 and kick a Justin Tucker field goal with only 1:44 remaining and no timeouts for the Titans. Entering hurry up offense Mariota would attempt to put the home team in field goal position and force overtime. A bad holding call by Josh Kline would put a dent in that effort and  the Titans would be staring at 1st and 20 inside the 25 with only 57 seconds remaining. But the offensive Captain would keep his cool despite the struggles and connect on a 2nd down to Jonnu Smith and bring up 3rd and 6. Wide receiver Taywan Taylor would have the first down in his hands but drop it and it was do or die time in a 4th down conversion. Mariota got his team up to the line and would look for his #1 receiver and fellow captain of the offense, Delanie Walker.

Walker already had a score on the day, taking a 71 yard touchdown pass from Mariota in the early part of the 2nd half where he broke a tackle and streaked down the sideline. In this 4th down scenario, Marcus would call a similar play where Walker would get down field and cut out against to the sideline. Except this time,  the Safety would crash to cover Derrick Henry in the flat leaving Walker one-on-one with the linebacker. A perfect lob pass put it into Walkers hands and it was 61 yards for six with only 18 seconds remaining.

Nissan Stadium was jubilant in relief. They stole this one. But it will be a very long Monday in the film room next week. The Titans now head across the Atlantic to meet the Los Angeles Chargers at Wembley Stadium.