2K Online Franchise > News > League News > With two weeks left in the season, the playoff race is still too close to call

With two weeks left in the season, the playoff race is still too close to call 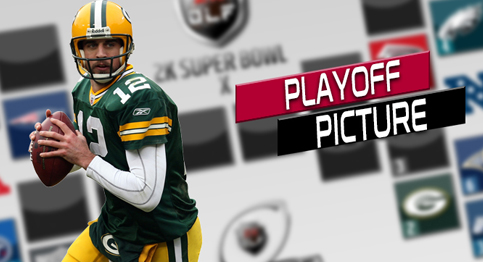 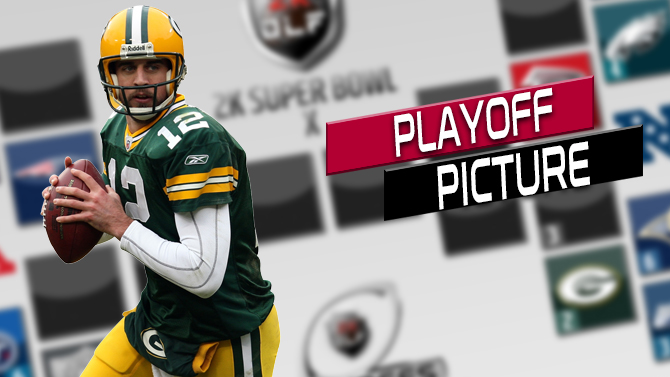 Talk about a race to the finish. Week 15 is in the books and with it, for some teams, came the end of their playoff hopes. The game of the week featured the Dallas Cowboys taking on the Oakland Raiders.

The Cowboys were hoping to sweep their bay area appearances, but unfortunately for them those hopes cam crashing down as the Raiders came away victorious with a 21-28 win. The loss dropped the Cowboys to 7-7 and to make matters worse the Minnesota Vikings and the Washington Redskins both won, which moved them to to a record of 8-6.

That’s just one example of what week 15 brought us. Let’s now take a look at exactly where the rest of the teams in the playoff hunt sit.

The Patriots locked up the division and with a win this week could lock up home field advantage throughout the playoffs, they’ll need a win or a Raiders loss. They’ll be smart to get it done this week to allow their star players to rest next week and during their potential bye week. Remaining Schedule: vs Bills, vs Jets.

The Raiders are starting to get hot as they got their third straight win last week against America’s team. Their still in hunt for a first round bye and home field advantage throughout the playoffs. This week they take on another NFC East team, the Philadelphia Eagles. If the Raiders can win on the road and the Patriots lose home field will be up for grabs in the final week of the season. Remaining Schedule: @ Eagles, @ Chargers.

The Jaguars got back to their winning ways last week by taking down the Houston Texans. The win keeps their hopes alive for a first round bye. A win this week and a loss by the Raiders would put them into a tie for second place. They’ll need to win out and have the Raiders lose once more in the final week in order to move into second place. Remaining Schedule: @ 49ers, @ Titans.

The Ravens did what all teams do against the Cleveland Browns, they won. The win officially eliminated the Browns from playoff contention and with the Cincinnati Bengals losing to the Minnesota Vikings, a win this week will lock the Ravens as AFC North champions. If the Ravens lose this week and the Bengals win, it will set up a win or go home scenario in week 17 when the Ravens take on the Bengals. Remaining Schedule: vs Colts, vs Bengals.

The Titans defense came through on the road this past week, but the real MPV for them had to be the play of QB Marcus Mariota. Mariota rushed for a career high 87, he lead all rushers in his team’s big win over the 49ers to improve to 9-6. The win gets them a step closer to locking up the final playoff spot. Remaining Schedule: vs Rams, vs Jaguars.

Coming off their week 14 loss to the Raiders, everyone expected the Chiefs to bounce back in week 15, but that didn’t quite go as expected. The Chiefs lost to their AFC division rivals Los Angeles Chargers 27-17. The loss dropped them down to the 6th spot as the Titans won on the road. A win this week won’t guarantee a playoff spot if both the Titans and Bills win, but a loss by the Chiefs could put them in a big hole heading into week 17. Remaining Schedule: vs Dolphins, @ Broncos.

The Bills offense came alive last week as they scored a season high 31 points against their division rivals, the Miami Dolphins. They’ll need their offense to keep that type of outburst going as they take on their arch rivals, the Patriots. A win by them and a loss by the Titans will move them into a playoff spot. Remaining Schedule: @ Patriots, @ Dolphins.

The Texans had a terrible game after putting up a win in week 14. They’ll need a lot of help this week and next if they want to get in as a wild card team. The good news for them is that they’ll be taking on a Pittsburgh Steelers team without Big Ben. A loss will eliminate them from playoff contention. Remaining Schedule: vs Steelers, @ Colts.

Even with a 6-8 record the Bengals still have a shot at getting into the playoffs, via a division title win. If they win this week and the Ravens lose, the Bengals will trail the Ravens one game for the division. If the Bengals win next week they’ll have swept the season series against the Ravens, which would give the Bengals the division. But, first things first, they have to get a win against a very good Lions team. Remaining Schedule: vs Lions, @ Ravens.

The Falcons eleven game win streak came to an end at the hands of the Tampa Bay Buccaneers. It was no surprise when you look at the fact that the Falcons didn’t start many of their super stars as they are getting ready for the playoffs and want to avoid any major injuries. Remaining Schedule: @ Saints, vs Panthers.

Aaron Rodgers was clutch in the last minute win over the Panthers last week. The win punched their ticket to the post-season, but in order to lock up the division they will need to get a win this week. Remaining Schedule: vs Vikings, @ Lions

Winners of four in a row the Seahawks can still catch the Packers for a first round bye. They’ll be on the road this week to take on the Cowboys. The Seahawks should feel confident as they have lost just once on the road this season. Remaining Schedule: @ Cowboys, vs Cardinals.

The Eagles got their wings clipped this past week by the then 1-12 New York Giants. The good news for Eagles fans is that their team is still in the drivers seat, the bad news is the Redskins are only 2 games back and their remaining games are against opponents over .500, one headed to the playoffs while the other will be looking to get some payback Remaining Schedule: vs Raiders, vs Cowboys

The Lions were a heavy favorite going into their week 15 game against the Chicago Bears. The Lions had won five games in a row and had already defeated the Bears once this season. But as someone once said “You play to win the game!…you play to win the game!” and that’s exactly what happen, expect the winning was done by the underdogs. The Bears beat the Lions at home 17-10. The loss puts them a full game behind the Packers for the division lead. They’ll have to get back in the win column this week and hope the Packers lose this week in order to keep pace for the division. Remaining Schedule: @ Bengals, vs Packers.

It might be time to press the panic button as the Rams have lost two games in a row, dropping their record to 8-6 and to make matters worse the Redskins and Vikings both won. Setting up a 3 way tie for the final playoff spot. The Rams win out, for now, based on their conference record and on the head to head win over the Redskins in week 2. If they drop a 3rd game in a row and any of the teams below them win, the Rams could be in serious trouble of not making the playoffs. Remaining Schedule: @ Titans, vs 49ers.

The Redskins took care of business at home against one of the worst teams in the league. They beat the Arizona Cardinals 20-45 and are on the brink of not only making the playoffs but, making league history. They could become the first team to start 2-6 and still make the playoffs. Remaining Schedule: Broncos, @ Giants.

After snapping their two game losing streak, the Vikings have now won two in a row to move up two games above .500. If they can extend that streak to three and the Rams and Redskins lose they’ll move into the final wild card spot. Remaining Schedule: @ Packers, vs Bears.

The 49ers suffered another tough loss last week. This time it was at home against the Titans. They had no answer for Marcus Mariota. A win this week will keep their small playoff chances alive, if the Vikings, Rams or Redskins lose. They truly have a shot at getting in, the Rams are on a downward spiral, the Redskins are 1-2 against the AFC West (Redskins play the Broncos this week) and the Vikings play the Packers. If those 3 teams lose, Week 17 against the Rams could be for a playoff spot. But again, first the 49ers must win this week against the high powered defense of the Jaguars. Remaining Schedule: vs Jaguars, @ Rams.

The Panthers almost had the win against the Packers last week. But, Aaron Rodgers had other ideas. The loss put them on life support, they have to win out or it’s over, plus they’ll need the 49ers, Vikings, Redskins and Rams to lose this week. If they win out and the teams in front of them lose out, mathematically the Panthers could end up in the 6th spot with a record of 9-7, while the rest finish with a record of 8-8 or 7-9. Remaining Schedule: vs Buccaneers, @ Falcons.

The Cowboys lost on the road last week in Oakland, putting them on life support. Mathematically they’re still in it but the scenario that need to happen is, they need to win their remaining games and all the teams above them need to lose out. That’s a huge order when you consider their next game is against the Seahawks, a team that has just one loss on the road this season. Remaining Schedule: vs Seahawks, @ Eagles. 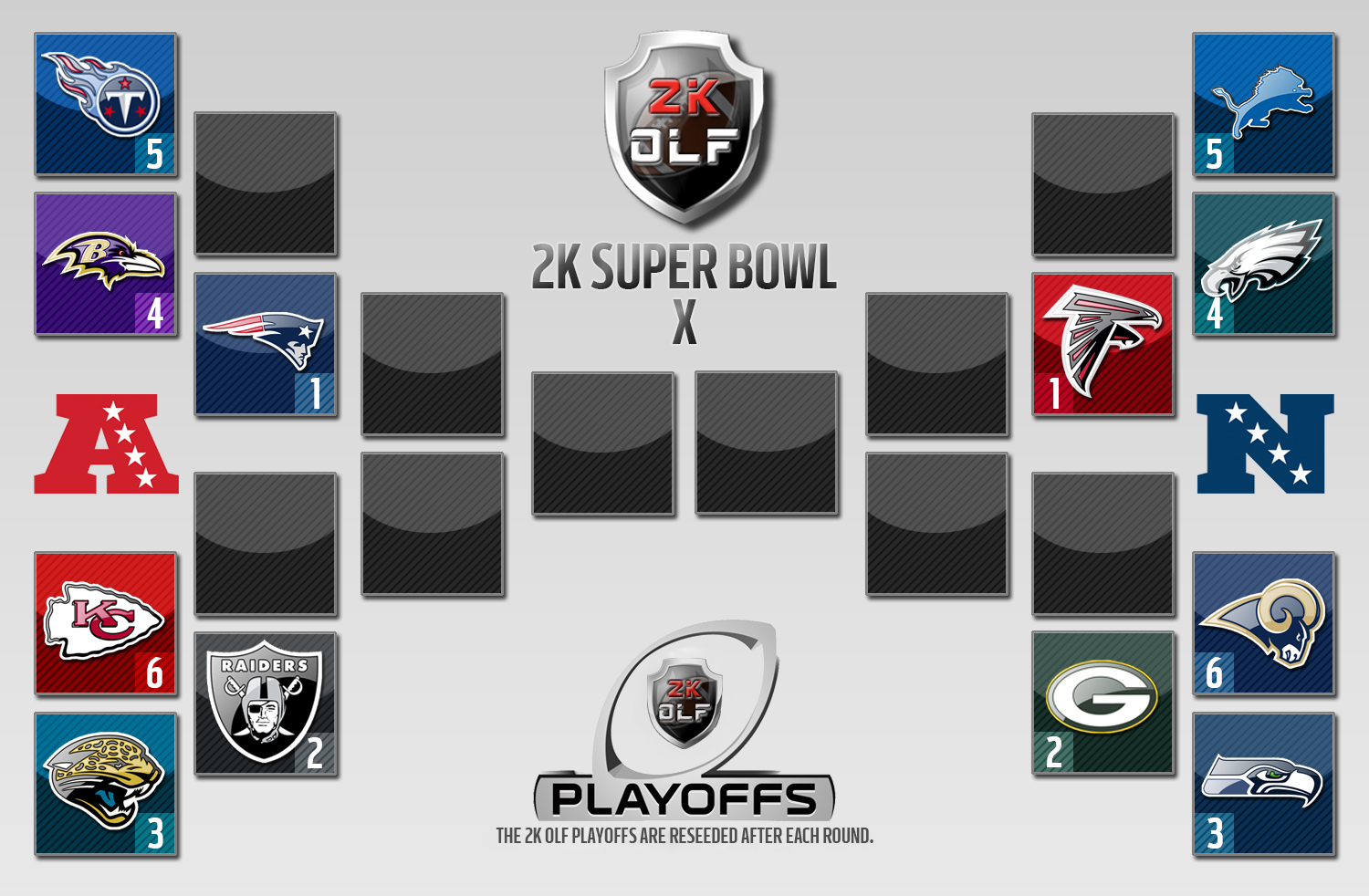