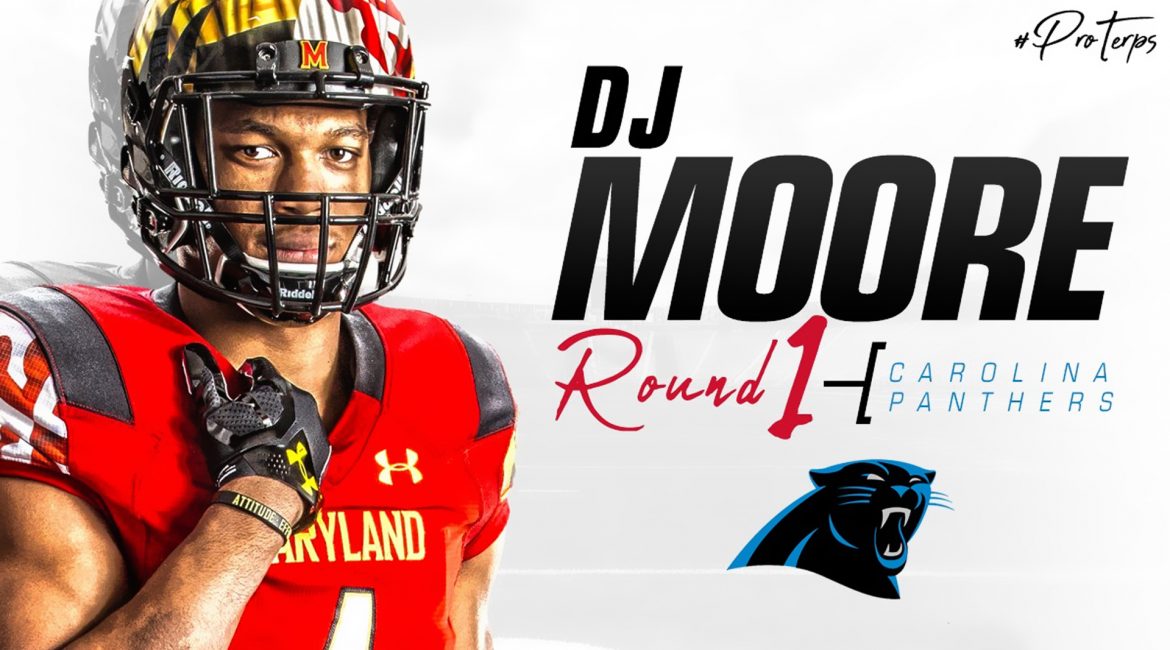 Charlotte, N.C.- The Carolina Panthers addressed a need at a wide receiver by drafting rookie D.J. Moore with the 24th overall pick in this years draft.

In his final year for Maryland he had over 1000 yards receiving and 8 touchdowns in his final year. He has speed, great hands, and seems to have knack for coming up with big plays in key moments.

Cam Newton seems to be a big fan of him as well and is slowly growing to trust his young wideout, “He has good hands and seems to always know where the first down marker is on the field, he definitely is showing he belongs out here with the first team, hes giving Torrey Smith a run for his money for the number 2 spot.”

Moore showed why the Panthers selected him as the first wide receiver off the board in his preseason game against the Buffalo Bills, and its because he just seems to make big plays on a ball that was under thrown, he showed great awareness by adjusting to the ball in the air and coming down with a 33 yard grab in front of 3 defenders.

The most spectacular play was his fourth and final reception. Moore lined up wide right and ran a shallow crossing route over the middle. He caught the pass about one yard past the line of scrimmage, hit the brakes, and sent the first Bills defender flying past him. Moore then broke toward the sideline where he juked a second tackler, stiff-armed a third tackler, and was ultimately pushed out of bounds by the fourth tackler. He turned a short reception into a 16-yard gain.

“This kid has a chance to be a special ball player I think.” Coach Miller had to say after the game. “He seems to have it all, smarts,strength and athleticism I know we are all excited to have him on our team, our team is going to be very explosive on offense when he is on the field. Dallas(Cowboys) and coach Perez is going to have a tough time finding a way to slow down this offense if we’re able to put a stop to that run heavy offense we are planning on seeing, its going to be a fun one on Thursday.”

When asked what he thought about the upcoming match-up against the Cowboys, Moore had this to say –  “I just can’t wait to go out there week 1 in the house that Jerry built and put on a show for my fans, I’m more then ready and have been waiting for this opportunity for a long time.”

Moore sounds ready for week one and only time will tell if Moore will become an elite receiver for the Panthers, but if this is any indication on what they’re getting, it seems like by the end of the year they will have found a new number one receiver on the team and potential top receiver in the league.