Into the steel curtain

PITTSBURGH, PA — The Pittsburgh Steelers are back in the playoffs after missing them last year for the first time in team history. The Steelers finished the season with a record of 10-6, which earned them their 4th division title in 5 seasons and although tied in wins and losses with the Raiders they finished with a conference record of 8-4, which earned them a first round bye.

The Oakland Raiders are in the divisional game thanks in part to their outstanding play last week in the wild card game against the Kansas City Chiefs. The Raiders won that game with a shutout at home and without their star quarterback Derek Carr. Carr was injured in the final game of the regular season against the Denver Broncos, the loss ruined the Raiders’ chance at a playoff bye.

Tarik Cohen To Start As Lead Back For The Bears 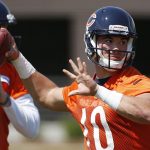 Trubisky To Start In Week Two Against The Giants


ATTENTION! Now that EA has fixed some errors with