If the playoffs started today 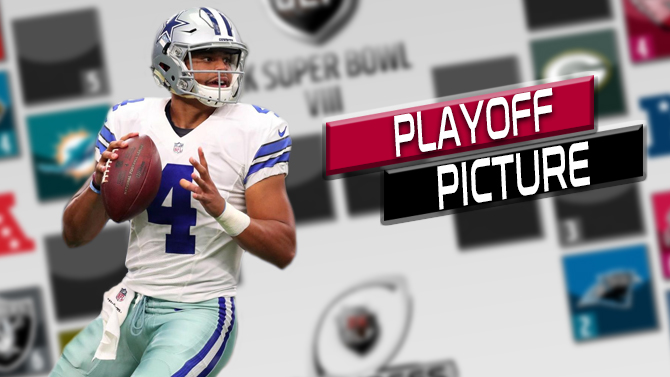 Salem, OR — Week 14 of the regular season is here and with just three weeks let’s take a look at where teams stand and who they would match-up against if the season ended today.

First up let’s take a look at the NFC.  The Green Bay Packers (11-1) currently sit in first place as they have lost just one game this season. They are the first team in the league to lock up their division and a win this week will ensure that, in the NFC, the road to the Super Bowl will go through Green Bay.

In second place we have the Carolina Panthers with a record of 10-2, their remaining schedule favors their chances of getting a first round bye as they face two non-playoffs teams, Washington Redskins (5-7) and the Atlanta Falcons (4-8). If the Panthers manage to win 3 of their last four games, they won’t have to worry about getting help from anyone else.

Trailing the Panthers by a game are the Dallas Cowboys who are 9-3 and with a win this week against their NFC East rivals, the New York Giants (5-7), the Cowboys will ensure themselves their first division title since season 6.

Rounding off the top four seeds are the Arizona Cardinals (7-5). The Cardinals are in a dog fight with the San Francisco 49ers who sit in 5th place with the same record of 7-5, but the Cardinals hold the tie breaker since they swept the season series.

Lastly, the team that has surprised everyone the Tampa Bay Buccaneers (7-5). This was a team that was 2-5 after week 8, since then they have won five straight games and are proving to be a team no one wants to face in the playoffs.

Now let’s take a look at the AFC. In the AFC the Miami Dolphins (10-2) have held on to the top spot all season long. Their next 4 games will be tough as they take on teams with a .500 record or above. They control their own destiny when it comes to locking up a 1st round bye and home field throughout the playoffs. If they go 3-1 in their next four home field will be theirs.

Sitting in second place are the Pittsburgh Steelers (9-3). The Steelers are a surprise as they haven’t had a winning season since Season 5, when they finished 10-6 and with the hiring of their new head coach Matt Bright, everyone thought this would be a sort of reboot year for them but instead they keep putting up win after win.

Third place, for now, belongs to the San Diego Chargers (8-4). Before last weeks loss to the Buccaneers, the Chargers had won six straight games, including a huge win against the Dolphins in week 10. They can’t afford a two game losing streak as both the Kansas City Chiefs (7-5) and the Oakland Raiders (7-5) are right behind them.

In fourth place we have a team that has come out of nowhere and has set a new record for most ties in a season, the Jacksonville Jaguars (7-3-2). The Jaguars haven’t had a winning season since Season 2 when they won their division with a record of 9-7. If they can finish with at least a record of 2-2 they will lock up the AFC South and punch their ticket to the playoffs.

The final two AFC wild card teams headline this week’s game of the week. The Kansas City Chiefs are the fifth seed and are tied in wins and losses with the sixth seeded Oakland Raiders. It will be a nail bitter to see if both of these teams can get into the playoffs since the Buffalo Bills (6-5-1), New York Jets (6-6), Cincinnati Bengals (6-6) and the New England Patriots (6-6) all have a shot of overtaking one of them should either one stumble in the next 4 games.

That’s about does it for now. Be sure to checkout the complete playoff standings and be sure to tune into every game broadcast on our YouTube channel.