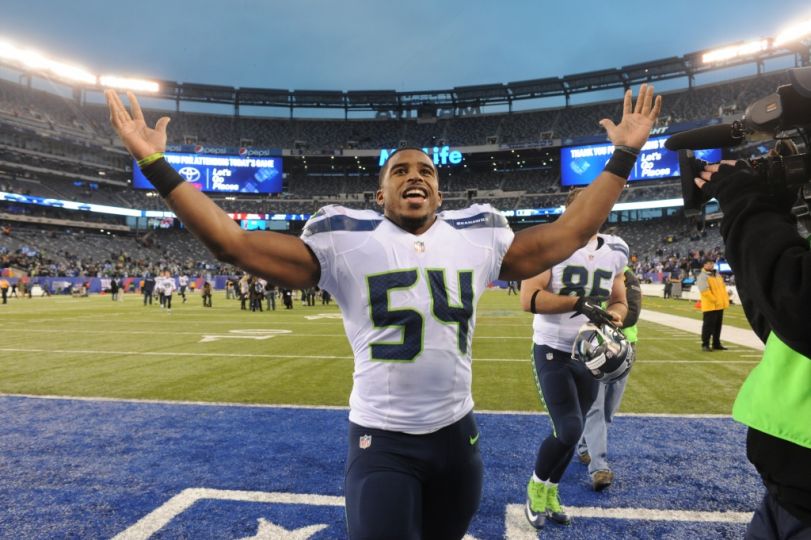 East Rutherford, NJ – The Seattle Seahawks had a most enjoyable trip to MetLife Stadium. It may not be their last visit there this season.

The Seahawks intercepted Eli Manning three times in a stifling defensive effort that set the tone for a 31-7 win over the New York Giants that kept the pressure on the Washington Redskins for the number one overall seed in the NFC.

Bobby Wagner led the way with two picks and Seattle (12-2) limited the Giants to 191 total yards in dealing New York another ugly loss at home.

“You have to say something about the defense giving up less than 150 [passing] yards on the day against a quarterback like that and those receivers,” said Seahawks head coach Lewis Johnson. “A lot of it happened up front, but our guys on the back end came through again with the matchups that we had and played great coverage all day long.”

Marshawn Lynch added 83 yards from scrimmage and two touchdowns for the Seahawks, who now own a commanding two-game lead over their closest NFC West competitors with two to play.

Seattle has its final two regular-season outings at home, where it has gone 6-0 this season, giving the Seahawks the inside track to represent the NFC when MetLife Stadium hosts the Super Bowl on Feb. 2.

“It’s a beautiful place,” Sherman remarked. “We’d love to be back.”

Russell Wilson finished 9-of-14 for 93 yards and two touchdown passes.

Manning finished with 148 yards on 15-of-29 passing for New York (6-8), which is assured of a losing season for the first time since the struggling quarterback’s rookie campaign in 2004.

“Today it just seemed like their guys made plays,” said Manning. “They went up and grabbed some balls and took it away from our guys.”

Game ball goes to MLB Bobby Wagner who made some big plays for his Seahawks picking off Eli Manning twice.