Broncos Ruin the Raiders’ Chance at a Playoff Bye 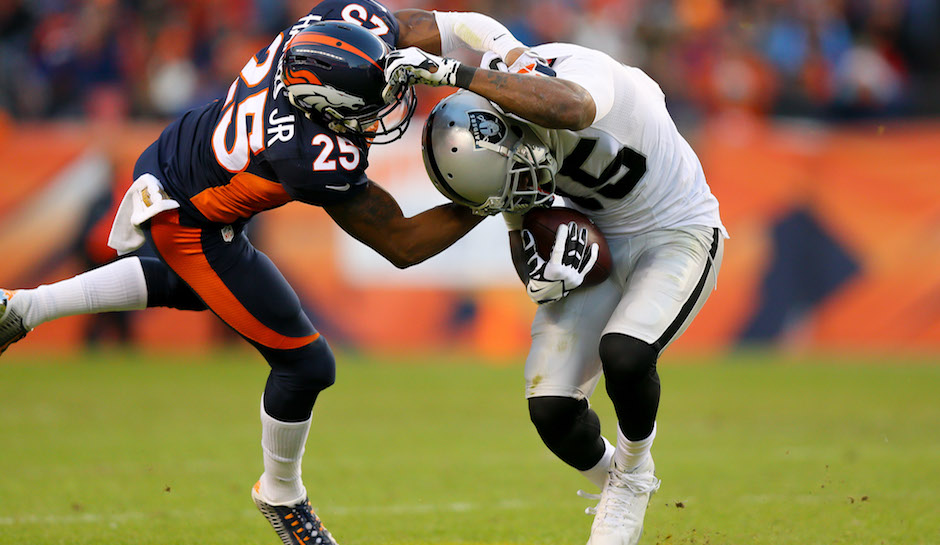 There was already bad blood between the two teams due to their rivalry. Let us not forget the overtime win by Oakland earlier this season. Leading up to their second game, words amongst players via social media escalated the matchup even more. Oakland Raiders starting left end Phil Taylor sent out a tweet calling out the Broncos and their star quarterback Peyton Manning.

With the buildup of the game at its peak, the players  could not wait to start hitting their opponents. The game  started with the Broncos making a statement. Linebacker Nate Irving from the Broncos stuffed Darren McFadden behind the  line of scrimmage. On that same drive, the Broncos took  out Raider running back Latavius Murray. The injury  turned out to be an ankle sprain but you could already  hear the yapping from both teams after Murray was  taken off the field. The Raiders were working on a strong  drive until Von Miller sacked Derek Carr for a loss of 12 yards. The Broncos defense was able to hold the Raiders offense and the Raiders were forced to punt. It was now the Raiders’ turn on defense to show what they got. Well, let me tell you that their defense wasted no time. Defensive tackle Pat Sims sacked Manning on the first play of the Broncos drive for a loss of 8 yards. The Raiders showed why they are a top 5 defense by forcing the Broncos to a three-and-out.

On the Raiders next drive on a 2nd and 6, the Raiders are in a shotgun formation and DeMarcus Ware bursts through the Raiders’ o-line and sacks Carr for a loss of 11. The Raiders had a third and long and eventually punted the ball.

On the next drive for the Broncos, it was 2nd and 10, Manning catches the Raiders on a blitz and finds Ronnie Hillman on a wheel route and Hillman goes to the house for a 92-yard reception.

The Raiders showed some spark on the next drive with McFadden going for a gain of 49 yards. On that same drive Carr dishes the rock to tight end Mychal Rivera for two big plays which took them to the Broncos’ 1-yard line. Soon the Raiders score on QB sneak from Carr and the Raiders tie the game up 7-7 in the second quarter with 2:30 left to play.

On the Broncos’ drive, Antonio Smith, sacks Manning for a loss of 7-yards and eventually takes Manning out of the game. At this moment that Denver crowd is in an uproar because the Raiders did what they said they were going to do. Even though Phil Taylor was not the one that sacked Manning, he was making a shrugging sound towards the Broncos’ bench.

Subbing in for Manning was Osweiler. On Osweiler’s first pass attempt, none other than Phil Taylor greeted him by sacking him into the ground. To just aggravate the Broncos and their fans even more, Taylor did the ‘Mile High Salute’ after his sack. Taylor was greeted by loud boos and Bronco offensive linemen shoving him. The referees quickly separated the players in order to proceed with the game.

The Denver crowd was in full-effect and couldn’t let Carr and the Raiders hear the play being called. The stadium was so loud; the Raiders were penalized for a false start and a delay of game on back-to-back penalties. On the next play, the worst thing that could happen to the playoff bound Raiders happened; Malik Jackson hit Carr so hard that he took him out of the game with a dislocated elbow. At this point, Coach Farias should have already had taken Carr out of the game but for some reason decided to leave him in. Well, I bet he regrets that now.

Once Carr was seen on the ground, the Raiders offensive line got into a scuffle with the Broncos defense. Offensive guard Khalif Barnes was seen The Raiders plug in Matt McGloin at quarterback and on his first passing play he gets hit as he throws the ball and gets intercepted by Nate Irving. With less than a minute before halftime Osweiler finds Demarius Thoms for a 20-yard pass. On the third play of that drive, Osweiler finds Ronnie Hillman for a 12-yard touchdown.

The Raiders couldn’t come back after that and were forced to punt the ball after a DeMarcus Ware sack.

The Raiders make an impressive drive that began in mid-third quarter and carried over into the fourth. McGloin takes the Raiders on a nine play 82-yard drive where he finds tight end Rivera for a 2-yard touchdown pass.

Now with the game tied and with less than seven minutes play. Both teams need to perform at their best. The Broncos don’t’ score on their next drive but their defense stepped in when needed. Linebacker Danny Trevethan sacks McGloin and eventually makes them go on a third and long. McGloin throws a pass which gets snagged by defensive back R. Moore.

The Broncos try their best and come up big on a 3rd and 10. Oswieler finds Thomas for the first down conversion. Matt Prater kicks the field goal with 0:53 seconds left to play. The Raiders could not make the comeback and lose to the Broncos 14-17.

It was payback for the Broncos and their fans because with the Broncos win, the Raiders will host a Wild-Card game rather having a bye. So the Raiders have to work even harder to make it to the Super Bowl.

Our sources say that the injury to Derek Carr appears to be more serious than before. Instead of being out for 3 weeks, he will be out for 5 weeks and this means that Carr will not be available for the rest of the playoffs. That is a major hit for the Raiders and who knows how McGloin will do in leading the Raiders to the big game.

The Broncos fans were celebrating as the Raiders walked with their heads down into the tunnel. Coach Farias was disappointed with the results but he knew that his team played hard. “The elements were in Denver’s favor. There is no way that he would have made that field goal anywhere else,” says Farias. Phil Taylor was available for comment and he apologizes for seeing Manning get taken but he said that, “its just part of the game. We know Denver go lucky on that field goal. But its ok. We’re in the playoffs and they’re not. We may have to play an extra game but that won’t matter. We’ll be ready.’