5 Reasons Why: The Rams will win the Super Bowl 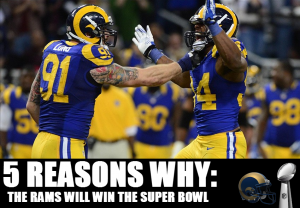 The Rams are currently one of the hottest teams in the league. Here are five reasons they will continue to ride the momentum wave to a 2K Online Franchise Super Bowl trophy.

1.) BATTLE TESTED –  The Rams play in undoubtedly  the toughest  division in football, the NFC West. The NFC West teams combined records are (40-16). Surviving this division would be one thing but the Rams are (3-2) in the division and are tied for 2nd with the (10-4) Cardinals in the division race. Not only do I think the Rams will finish strong to secure the 6th and final playoff spot but if Seattle is not careful the Rams may be able to sneak into a first round bye. Seattle finishes the season @ARI and @STL. Keep in mind that the Rams beat the Seahawks 14-17 in their first meeting this season during week 8.

2.) ARIEL ATTACK – With three receivers over 600 yards receiving, Sam Bradford plays no favorites. When you have two wide receivers (Tavon Austin and Chris Givens) with 95 speed as well as a tight end (Jared Cook) with 90 speed the threat of the deep bomb has defensive coordinators shaking at the knees. Good luck telling a linebacker that they not only have to stop the run but also have to watch out for the tight end blocking and then releasing on you for a 50 yard gain. Unless you have Seattle’s caliber of defense, slowing down this offense will be no easy task.

3.) COACHING EXPERIENCE – Coach Davis was very successful with the Falcons before his stop in St. Louis and has compiled a (33-15) all-time record.  This isn’t his first rodeo so you won’t be shaking any clammy hands before kickoff. Be prepared for a focused field general who will be ready to counter anything you throw at him.

4.) STREAKING – The Rams have not felt the sharp sting from a loss since week four. Let me repeat that. The Rams have not LOST since week four compiling ten straight wins!! Many felt compelled to write St. Louis off after a dreadful (0-4) start but Coach Davis knew things would turn around. Each loss came by only a single possession and three of those four opponents have the possibility of making the playoffs. While you always hear coaches say no loss is a good loss, I guess you could say those were the best non-good losses you could have. Put that in your pipe and smoke it bandwagon jumpers!

5.) WILDCARD SEEDING – It has become a trend that wildcard teams go on to win the Super Bowl. While it is true that the Rams will have a tough road to hoe their regular season schedule has prepared them mentally and physically for the task at hand. Look out for a first round rematch with the Falcons. In week 2, the Falcons edged the Rams by a final score of 48-42. Matt Ryan lit the Rams secondary up going 17/24 for 474 yards and 5 touchdowns. The Rams secondary has gotten better though and is ready for the challenge. Beating the Falcons would match the Rams up with the number 1 seed in the NFC. That seed is still up in the air as the Seahawks and Redskins are fighting for home field advantage. With the Seahawks the Rams know exactly what they are in for as they would have seen them twice already in the regular season. A match-up with the Redskins would definitely prove a challenge but no Superbowl path is easy.