2K Online Franchise > News > Team News > When it Rains it Pours, Panthers Drown out Bills in a 19-0 Victory

When it Rains it Pours, Panthers Drown out Bills in a 19-0 Victory 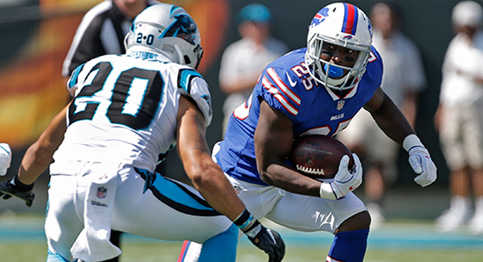 Charlotte, N.C. — “Ya, the weather definitely played a huge roll in this game today.” said Panthers head coach Mark Miller after the game. “It certainly seemed to have an affect on two dropped touchdowns.” is that why we saw Benjamin doing push ups on the sideline? “HaHa, ya he had a for sure touchdown rattle off his hands and when the offense came off the field Cam let him know he owed him some push-ups for missing that one.”

Coach Miller seemed to be in a much better mood after this game then last weeks that’s for sure, and why wouldn’t he? This defense came out hot today forcing 4 forced fumbles, 3 interceptions and 5 sacks!!! The final interception came from Vet Thomas Davis Sr, who showed of some nifty moves on his way to scoring his first touchdown of the season. “It felt great to seal the game that way.  The offense was struggling so we knew that we had to dig in and come up with some big plays, you guys saw those moves on my touchdown right? I had to show these young bucks that I still got those moves.”

Thomas Davis did it all on Sunday to pick up his offense, he collected 3 tackles 1 sack 1 forced fumble and the pick six to seal the game.  It was a great effort from a defense that saw the San Francisco 49ers go up and down the field on them last week.  They were able to slow down one of the leagues most dynamic runners in LeSean McCoy by holding him to 100 total yards and causing him to fumble once.

Speaking of the run game, It was nice to see the commitment to the run finally. It wasn’t extremely effective, only picking up 70 yards on 25 carries, but it helped keep the defense honest and made the play action much better. Christian McCaffrey was able to get some tough yards against a stout run defense, he had 41 yards on 17 carries while chipping in 31 yards on 5 catches.

Cam was able to escape the pocket and pick up a few key first downs. Yet again this team struggled to find the end zone. The Panthers had two key drops, again, that would have resulted in touchdowns. Newton struggled pushing the ball down the field, but seemed comfortable just taking what the defense was giving him. He made a poor decision that resulted in an interception throwing into triple coverage. “I just was getting impatient I tried to make something happen that wasn’t there. I gotta be better then that, thankfully the defense held it down for us.” Newton said during the post game.

Newton finished the game with a 61.0 quarterback rating going 11/17 for 125 yards and 1 interception. This team will be hoping that as the season goes on and his health improves and that Cam can dawn the superman cape once again to carry this offense into the post season.