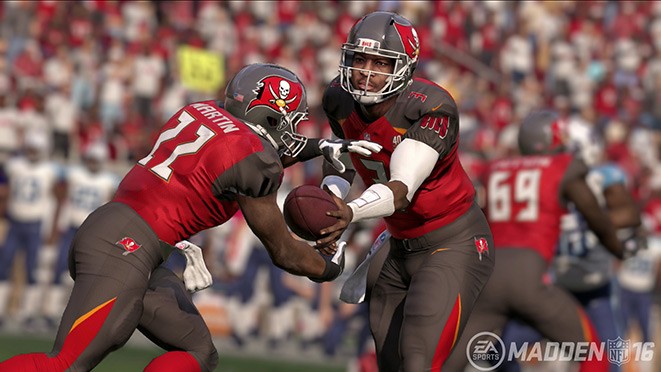 With Madden NFL 16 out in a few short weeks, let’s take a look at the new kids on the block, the rookies. Madden has revealed the top ten Rookie Ratings in Madden NFL 16.

Check out the complete list of the top ten rookies in Madden NFL 16 below and be sure to let us know if you agree with EA’s list or who you think should be added to the top ten.

Cooper should be a primary receiver from day one and a favorite target of second-year QB Derek Carr. In addition to his rookie-best 82 OVR, he brings 92 Speed, 94 Agility, and 87 Catching (second only to Kevin White among rookies).

Gurley has the quickness with 91 Speed, 87 Acceleration, and 80 Elusiveness. The power shows up with 91 Trucking, 89 Stiff Arm, and 91 Carry. Just watch out for that 73 Injury Rating.

Williams brings excellent 90 Block Shedding, 87 Strength, and 85 Power Move ratings to beat offensive linemen. He also has 83 Pursuit and 82 Acceleration to get to the quarterback.

Scherff won the Outland Trophy at left tackle, but he’ll play right tackle for the Redskins. He tops all rookie offensive linemen with 89 Run Block, as well as 83 Strength and 80 Pass Block.

Fowler excels at edge rushing with 86 Speed, 89 Acceleration, and 83 Pursuit. He’ll get around linemen with 83 Finesse Move and 84 Agility, as well as 87 Tackle.

Gordon is an even better speed back than Gurley with 91 Speed, 88 Acceleration, 80 Elusiveness and 91 Spin Move. His 69 Trucking limits his inside runs, although he has 83 Stiff Arm.

White has big shoes to fill following the departure of Brandon Marshall, but he’s a deep threat with 94 Speed, 92 Acceleration, 88 Agility, and rookie-best 88 Catching.

Mariota is a double threat with 87 Throw Accuracy Short and 88 Throw Accuracy Mid, as well as 90 Throw on the Run, 88 Speed, 90 Acceleration, and 79 Elusiveness.

Beasley is another quick edge rusher, but he backs it up with 87 Strength. He’s coming around the end with 88 Speed and 89 Acceleration. To knock down passes, Beasley brings rookie-best 92 Jumping