The Next Paul Brown: Scottie The Great 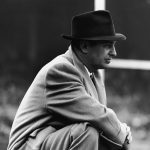 CLEVELAND, OH – 54 YEARS!!!! That’s exactly how long it’s been since Paul Brown coached his team the Cleveland Browns. In that span the Browns have had numerous head coaches and owners. The Browns are hoping that those trends stop now!

Since the Browns have returned to the league in 1999, the team has hired it’s 9th coach in 16 years. Needless to say, but we will anyway; this team needs consistency to be able to gain sustained success.

At the recent scouting combine we spoke with Scottie the Great and he had some very interesting things to say.

We asked him “What do you think of your current roster and how does it fit your scheme?”

Scott responded with, “We have a number of class acts and superstars that are on the roster. Unfortunately; though we have so many holes that by the time I can make this team relevant these superstars will be passed their prime and on the downside of their careers. I’m fortunate to have the players I have because they can be valuable assets when trying to build a team. When it comes to my scheme I can make my scheme fit what my players do best, but right now I need to get talent in certain spots to be successful. ”

We asked him “What are your intentions with the current players and how do you intend to build your team?”

Scott says ” We have to build through the draft! This league doesn’t wait for you to become successful. Sometimes you have to do things that you don’t want to in order to build a winner. I may make some decisions that the fans won’t like, but I promise if we start making the playoffs and winning, the fans will forgive me for things I might do to help us get there.”

That lead us to the obvious questions of who he would trade, who was off limits, who would he cut, and who was he looking to draft?

We got the expected response that anyone was tradable for the right price, but he wouldn’t just give away players to make a headline. Scott actually got pretty blunt with us. He said he’d “trade his wife for another woman if she couldn’t make him breakfast the way he likes it anymore.” He also got very serious with us too. Scott said he is really fond of the players on the roster. As Scott came up through the league he’s known these players and what they are good at. Scott said it would be hard to get rid of some of them because of what they mean to the city, fans, and the team. He said that even though it’s a business there is still apart of him that is emotional about losing players he has watched grow up in front of him. “One thing is certain” he said. “Father time is undefeated and eventually we all get old and I need to make the hard to decisions now before it’s too late and does the team no good.”

He said he couldn’t give us any info on who he would draft or cut, but that all options are on the table.

Scott said he would talk to his players before making any moves to see what they wanted, if such a move were to happen. Scott also said that some players have come to him wanting the opportunity to win a championship knowing the team is going to start a rebuild.

Business is business and sometimes you have to set your emotions aside to get ahead in this league.

We will see what the future holds for the Cleveland Browns, but for now, Scott is making it known that this is his team and he will make it relevant again. He will restore this team to the greatness it once was 54 years ago when his idol Paul Brown was the head coach.