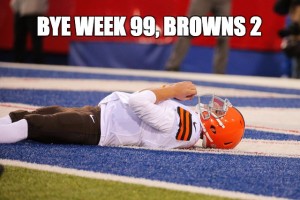 Cleveland, OH – IN LOSING.  The Browns go into the bye with no wins. The team has made numerous trades coming into the bye and recently parted with Johnny Manziel for a seventh round pick from the Patriots.

Im giving the guys a couple extra days off. Mentally were drained. We put in the hard work week in and week out on the practice field and in the film room. Coaches are here early and stay late developing game plans and unfortunately we’re just being out coached. We’re making mistakes, dropping balls, and feeling defeated. I expect our team to come in and turn it around after the bye.

For coaches sake he better hope his team steps it up because he might be writing game plans standing up with how hot that seats getting.