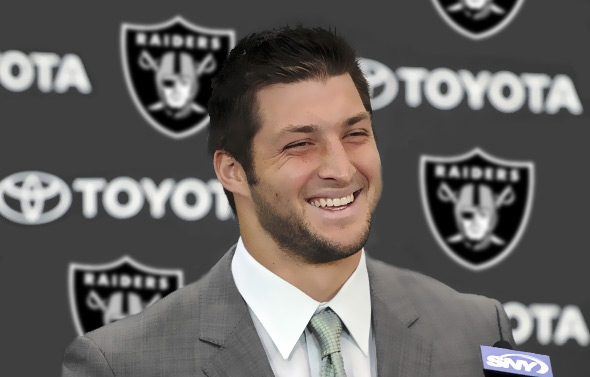 OAKLAND, CA — The Oakland Raiders Have signed veteran Tim Tebow to a 1 year deal worth $1.02 million. He is likely to become the 3rd string quarterback behind starter Derek Carr and second stringer Matt McGloin. Tebow was a free agent last season; however, he stayed busy while being a commentator on Good Morning America and on the SEC Network. Although he was off the field last season, he managed to stay in shape and ready for a chance to return to the league.

“I’m fortunate to be where I am today and thankful to Coach Farias and Jack Del Rio for giving me a chance to fulfill my dream.”

Coach Farias on the signing, “Actually it was all DC (Derek Carr). He came to me with the idea of creating a versatile offense to give teams different looks. So after meeting with our offensive staff, we thought about bringing in Tim. We reached out to him, worked him out and signed him the same day. We’re looking forward to having him be a part of our team.”

The Raiders do not seem too worried about all the media attention circus that seems to follow Tebow.

Since the signing of Tim Tebow, his jersey sales have been selling out online.