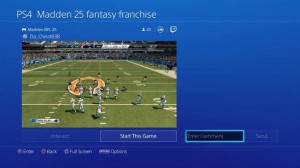 Live streaming and viewing on PS4

Now that the league has gone to the  Playstation 4 we can start talking about the one feature that will change the way we watch league games. In the past those of us with a personal video recorder (PVR) we’re able to record our games and share them with the rest of the league via YouTube. Thanks to the Playstation 4 now EVERYONE has a PVR!

Sharing video from your Playstation is as easy as a push of a button. The Dual Shock 4 has a Share button that will become your friend as you capture every moment from every game to share with the rest of the league. This will be a mandatory feature of the league as there is absolutely no reason why you can’t share video.

There are 2 options to share video with the league. The first option, which for most might be the best way, is to simply press the share button and upload your video to Facebook. You can hide those post from your timeline so you don’t overwhelm everyone on your friends list with a bunch of gameplay video. Then you can share it with the league on our 2K Online Franchise Facebook page, we’ll take care of the rest to have your video appear on our site and our YouTube channel where it will be edited together into one video.

Option number 2 would be to stream your game via twitch.tv, then record it by running the free Video Lan player and following these instructions. Then once you have the recording file from your stream you can upload it to YouTube. It is a bit more work then the 1st option but it does give you more control over what you are recording and no need to press anything while playing.

The streaming option will become the best choice once archiving becomes available on Twitch.tv. According to the Official Playstation FAQ on the subject, while the Playstation 4 supports livestreaming of both Twitch and Ustream there is are some issues stopping it from archiving…

Can I archive my livestreams on Ustream or Twitch?

At this time, livestreams will not be archived for further viewing on Ustream or Twitch. However, this feature will be supported in the future. Please follow PlayStation.Blog and PlayStation.com for news regarding PS4’s video services following launch.

Once archiving becomes available everyone will be able to stream their games and use the option twitch has to push your archive to YouTube.

So there you have it for now, remember….

If you do stream your game let us know! It’s a feature we have been waiting for, for a long time! specially the big games! If you guys have any questions feel free to post in the comments section below .

In the meantime here is  a test of a shared game on Facebook, recorded and shared by Andres. After each quarter he pressed the share button and uploaded that particular quarter.