Round 1 goes to the Redskins 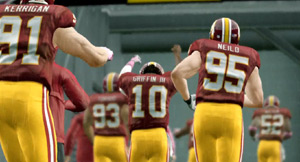 With 3:43 left in the 4th quarter and the Giants trailing by 9 points, Giants QB Eli Manning threw his 2nd interception of the game. Redskins CB Ron Bartell intercepted the ball at the Giants 43 yard line and ran in back to the 1 yard line. On the very next play Redskins HB Alfred Morris would run in for a touchdown, giving the Redskins a 16 point lead. The lead proofed be enough as the Redskins would go on to win this one by a final of 28-37.

Unlike his opponent across the field, Redskins QB Robert Griffin III was able to make the key passes at key times. He threw zero interceptions, 2 touchdowns, completed 13 of 24 passes, passed for 302 yards and finished with a QB rating of 126.00.

Eli Manning’s play and the Giants inability to convert on 3rd downs were a big factor in the Giants loss. Despite throwing 3 touchdowns, Manning threw 3 interceptions, completed just 13 of 34 passes and finished the night with a 61.1 quarterback rating. Manning was asked if the rain played a factor in the game “Yeah it does play into it, but I still need to be able to make good decisions out there. A few of those throws I wish I could have them back, we played a good team and it was more about poor decisions then some rain that played a key into us loosing today.”