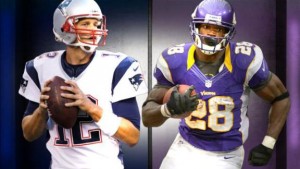 Minneapolis, MIN — After an upset victory over the St. Louis Rams last week, the Minnesota Vikings opened their first home game against the New England Patriots. The two opposing starters and former teammates finished week 1 with phenomenal passing ratings; Tom Brady (158.3) and Matt Cassel (158.1), combined with a total of 6 touchdowns and 546 passing yards. Entering week 2, both teams made the top 10 Offensive rank, Patriots (7) and Vikings (10). However, both of their Defensive ranks were near to the bottom with Patriots (25), and Vikings (28). Heading into the game, Matt Cassel was thrilled about facing his former team. “Am I excited? Yes! I’ve had the opportunity to sit back and learn from one of the greatest Quarterbacks. With that being said, I’m really looking forward to this game and showing them what I can do.”

The game ended with in a 35-7 victory for the Patriots; which had a lot to do with their hot start that led them to score 28 points in the first two quarters. “Knowing how talented their team was; we didn’t want to give them any chances. Coach Nguyen wanted us keep pushing and clawing for the victory. The sooner, the better. It was great team victory and now it’s time to prepare for our first home game against the Raiders.” – Tom Brady

Coach Nguyen elaborated what Brady said; “Good team victory over a really good team. It was all hard earned. Credit to the coaching staff for preparing the players for this tough road game. However, we have to keep moving and let the momentum carry over into next week against a really good defense that held our division rivals (Jets) to only 3 points.”

Coach Nguyen also spoke about their promising 2nd year, defensive end Chandler Jones’ injury. “Yes… unfortunately, Chandler will be out for about a month from a tear in his shoulder. In the mean time, we’re going to look through free agents for somebody to fill in his shoes.”

As for the Vikings, they couldn’t establish a run game or convert for first downs in the first half. “It was frustrating. We had a game plan entering the week and we couldn’t execute. We had a costly turnover that gave them very good field position. You don’t ever want to give a good offensive team the ball as frequently as we did. We have a few days to fix that so we’re going to focus on our next opponent.” said a disappointed Coach Zimmer.

Adrian Peterson was held to 12 attempts for 27 rushing yards, and an average of 2.2 per carry. Peterson didn’t have much to say in the locker room. “As captain, I’m taking blame for this loss. I didn’t do my job. It’s that simple. That fumble was a huge blow to our confidence and I’m going to have to train harder. ”

Hightower ended the night with 5 total tackles (4 solo which were TFLs, and 2 sacks). The second year pro’s TFLs was the main reason why Adrian Peterson couldn’t find his groove.

“The coaches wanted me to stop the run early and it worked out for us. After a few 3 and outs, they gave up running which means we did our part.”