Rise of a nation 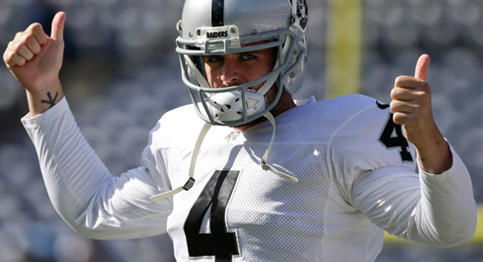 Pittsburgh, PA — The Pittsburgh Steelers and the Oakland Raiders surprised everyone by making it to the AFC Championship. Both gave it their all, but only one team could move on to their first ever 2K OLF Super Bowl appearance.

It was over when
Down by just one point with less than a minute left in the game, the Steelers needed to stop the Raiders to get one more shot at getting into the end zone or a field goal and on 3rd and 6 the Steelers were able to stop the Raiders from getting a first down. The Raiders punted the ball away into the end zone for a touchback with just thirty five seconds left in the game. Steelers began on their own 20 yard line and on 1st and 10, Ben Roethlisberger was able to find wide receiver Antonio Brown open down the field for a twenty three yard gain. The Steelers hurried up to the line of scrimmage as they had zero timeouts left. Roethlisberger once again tried to get the ball to Antonio Brown but the pass would be incomplete with just thirteen seconds left. Two plays and two incompletions later, time the clock hit zero putting an end to this game and an end to the Steelers season.

The Raiders strong safety, Nate Allen gets the game ball in this one. Allen shut down the number one weapon for the Steelers, Antonio Brown. Allen allowed just two receptions by Brown and had two of the three interceptions thrown by Ben Roethlisberger. “I can’t say enough about him today.” Said Raiders head coach Max Farias. “He, just like the rest of the team, gave it his all today. A lot of the plays he made came at crucial times and he was rewarded with those two interceptions.”

The Steelers made huge strides with the hiring of head coach Matt Bright during the offseason. With him in the driver’s seat you can expect Pittsburgh to be a competitive team for quite some time.

Tonight, the Raider Nation can celebrate this win as it has been a long time coming and tomorrow the Raiders can wake up and prepare for the biggest game in franchise history, 2K OLF Super Bowl VIII.