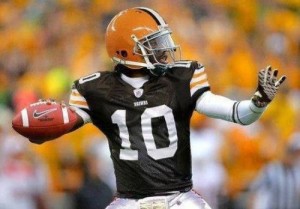 Hue Jackson and Sashi Brown had spoken to him and his rep prior to his visit to Cleveland — both parties expressed interest in wanting him (RG3) to come in and visit. RG3 and his rep seek to kick-start the career of the player and view Jackson and what they deemed ‘the up-start- Browns as a viable option due to Jackson’s strong fundamentals and communication skills.

Jackson wanted to sit down, see what RG3 is about, get past the football aspects and understand him as a person and play through scenario’s with him, football and life.

The Browns brass and RG3 are said to be interested in one another coming off the face-to-face. The Browns have spoken to RG3’s agent since the visit — there has not been any commitment, no negotiations with the lines of communication being very open and the Browns have been conducting their due diligence on RG3 the player.

The Browns in discussions with RG3 and his rep have promised nothing, said ‘if’ RG3 were to come to Cleveland, he would compete for a position — no guarantees