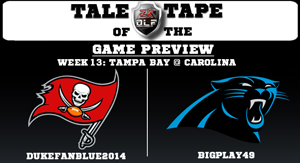 The Carolina Panthers and Tampa Bay Buccaneers will square off this Sunday at Bank of America Stadium, both playing for pride. To say this season has been a struggle for both of these teams would be an understatement. The Panthers currently sit at (2-7-1) while the Bucs are at (3-8). QB play has been one of the major reasons for the downfalls but that will be touched on later. Their first meeting this season ended with the Panthers stealing a game on the road 17-14. While the Bucs caused two fumbles they were not back breakers and the Panthers had just enough left in the tank to secure the win. With newly acquired head coach Mark Outten at the realm Bucs fans are hoping this meeting will end with a win. Breakdown of both teams follows. 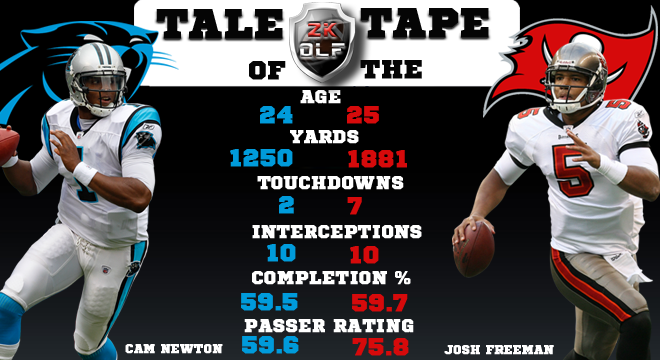 Cam Newton in his 4th season has many questioning whether he is a franchise quarterback. His touchdown to interception ratio is awful and he has yet to eclipse 200 yards passing in a single game this season.  One of his better performances however did come on the Bucs in their first meeting where he went 13/17 with 159 yards passing and 1 touchdown. The threat of the rush has Tampa on edge as Cam has 38 rushes on the year for 153 yards and 2 touchdowns.

Josh Freeman has shown flashes over his last three games passing on average for 250 yards per game. However, during that time he has also thrown 5 interceptions. It’s that inconsistency that has the Bucs at (3-8) and on pace for another high draft pick in this year’s upcoming draft. Freeman has a little kick in his step as well with 36 rushes on the year but should be considered no threat as most of those came from times when he was trying to evade the pressure. 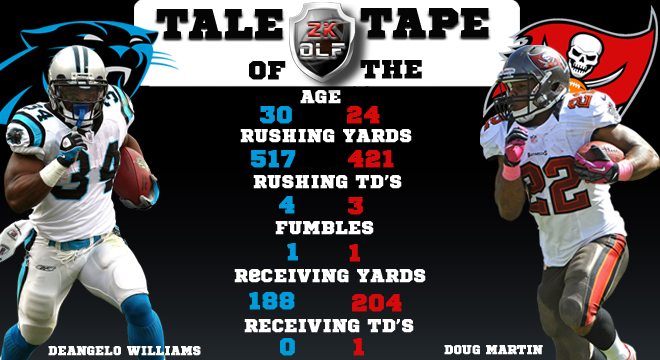 This could be Deangelo William’s last season in Carolina as he is getting ancient in running back years. There is a saying that once you turn 30 (as a running back) the brakes fall off but so far Deangelo has been Carolina’s workhorse and has done a good job holding onto the ball. His best performance came against the Bucs when rushed 24 times for 95 yards. Both of the Panther’s wins this season have come when Deangelo has gotten 20+ touches. I would look for them to focus on him this week.

Injuries have caused Doug Martin to miss three games in 2014 and the Bucs are hoping he can stay healthy enough to finish the season. Martin is coming off his best performance of the year where he rushed for 123 yards and two touchdowns in week 12’s win over Detroit. He also added another touchdown and 56 yards in receiving yards granting him player of the game honors. Carolina’s stout defensive line and linebackers will make it hard to run so look for the Bucs to use creative ways to get Martin the ball in his hands. 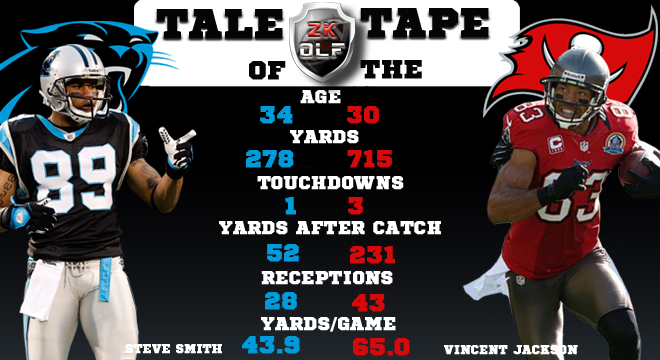 The Panthers have done a poor job of surrounding Cam with a good receiving corp. While Steve Smith is very talented he is not a number one receiver anymore. Couple that with the inability for Brandon Lafell to hold onto a ball and Cam is finding himself having to rely on passes to TE Greg Olsen. Unless you are the Patriots/Saints, if your top receptions leader is a tight end you have problems.

Vincent Jackson is having a solid season with close to 1,000 yards receiving. The receiving corp is not excellent but are more than enough to take pressure off Doug Martin and the running game. The inability of Josh Freeman to stay consistent has hurt this teams receivers’ s stats more than anything else. 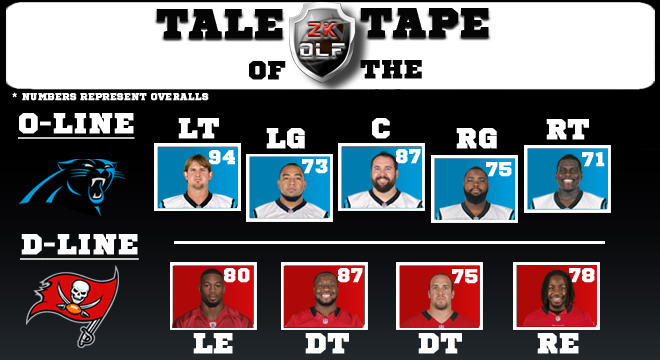 The Bucs defensive line have combined for 13 sacks on the season. While the Panther’s left side of the offensive line is very good, watch for the Bucs to bring pressure on the right side mixing up coverages/blitzes to try and confuse the right side. Cam has enough speed to roll out and extend the play if pressure is felt but this is not ideal due to his inaccuracies. 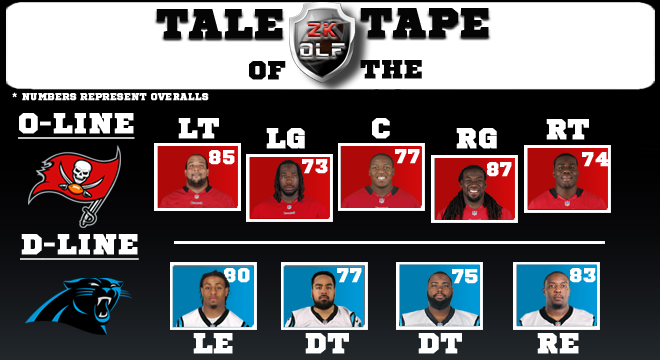 The loss of LG Carl Nicks has hurt the ability for the Bucs to keep Freeman off his back. They did a nice job last game but going up against the likes of Greg Hardy and Charles Johnsonwill be no easy task. Freeman better keep his head on a swivel because the “Kraken” is about to be unleashed. 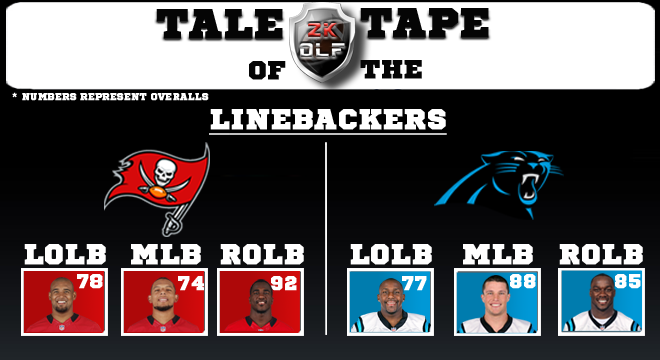 While ROLB Lavonte David has been a stud for Tampa this year he needs more help from his supporting cast. The Panthers on the other hand have two studs in Luke Kuechly and Jon Beason followed up with a strong supporter in Thomas Davis who look to wreak havoc on the running game of Tampa. 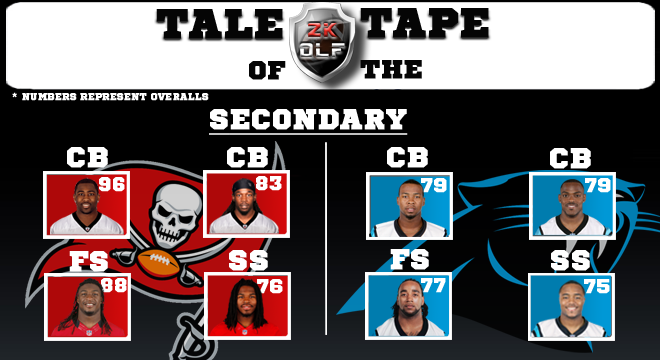 The Bucs have one of the best secondaries in the league anchored by CB Darelle Revis.  Add to that Rashean Mathis and Dashon Goldson and you have quite cast of characters. The Panthers will need to work to get open and will have to rely on the running game as to avoid Revis island. The Panthers secondary on the other hand has benefited from the front seven which has somewhat shielded their lack of pure talent. While effective, if the front 7 don’t apply pressure it could be a long day for Captain Munnerlyn and his group of coverage specialists. 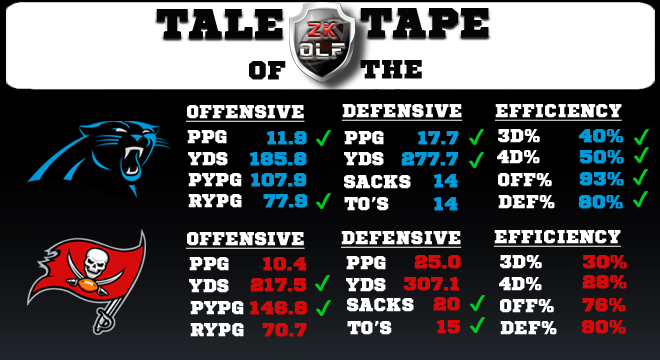 These two teams match up incredibly well with each other as we saw in their first meetings 17-14 final score. Ultimately I think this game will come down to who can run the ball better and control the clock. If the Bucs can run it will open up the passing game for their receivers to expose the lack of talent in the Panther’s secondary. If the Panthers can run it will eliminate the secondary advantage that Tampa Bay has. While the Bucs might be looking for revenge the Panther’s front seven will be too much as the Panthers will walk away with the victory and a season sweep.

MEDIA HIGHLIGHTS FROM THE FIRST MEETING THIS SEASON