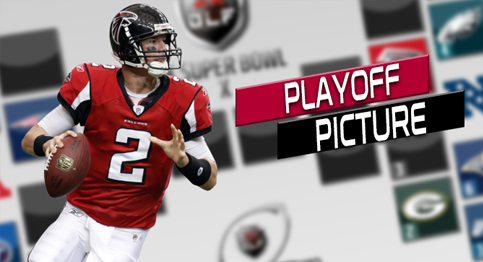 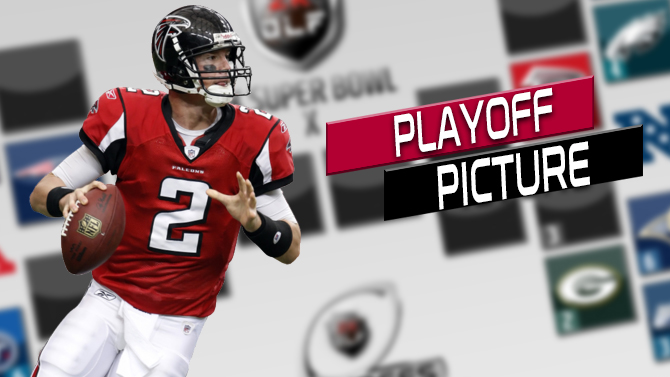 Salem, OR — With week 14 in the books and just 2 more weeks after this one it’s time to take a look at who’s playoff hopes are on life support, who has clinched and who has officially been eliminated from the playoffs.

As it stands right now, only two teams have locked up their divisions, while the rest are still up for grabs and to make things more interesting there are five teams in the NFC tied at 7-6, all one game back of the final wild card spot.

The Patriots have officially clinched the AFC East. It’s their first division title since Season 7. With the Raiders a game behind and the Jaguars 2, a first round bye isn’t a sure thing, yet. But if they win this week and the Jaguars lose they’ll lock up that all important first-round bye. Remaining Schedule: @ Steelers, vs Bills, vs Jets.

Coming off their unbelievable walk off field goal against the Chiefs, the Raiders can lock up their third straight AFC West title with a win this week against the Cowboys. What’s impressive about this team is that despite Derek Carr being out with an injury they’ve managed to find ways to win, thanks in part to great coaching by head coach Max Farias. Remaining Schedule: vs Cowboys, @ Eagles, @ Chargers.

It was an ugly loss for the Jaguars last week against the Seahawks. The loss might have cost them a shot at a first round bye, but with 3 games left they still have a change. But first, they’ll have to get back to winning and playing good football. Their next game is against a Texans team that won last week with strong defense. Remaining Schedule: vs Texans, @ 49ers, @ Titans.

The Ravens finally snapped their three game losing streak by beating the Pittsburgh Steelers 27-14 and with the Bengals losing, they’ve now moved into first place in the division with 3 games left. This week they can officially eliminate the Cleveland Browns from playoff contention, if they can get another road win. Remaining Schedule: @ Browns, vs Colts, vs Bengals.

The Chiefs were involved in one of the best games of the season last week, unfortunately for them they ended up on the wrong side. The good news is they’re still a favorite to make the post season. Two of their final three games are against division rivals and the next two are at home. Remaining Schedule: vs Chargers, vs Dolphins, @ Broncos.

The Titans loss against a team that had lost seven in a row and was just 2-10 this season is, was a perfect example that any team on any given Sunday can win. The Titans lost 21-38 and saw their one game lead in the wild card race evaporate. This week they take on a 49ers team that’s angry and desperate after losing to the Titans rivals, Texans. Remaining Schedule: @ 49ers, vs Rams, vs Jaguars.

The Texans defense was the star of the game last week in their 7-13 win over the 49ers and thanks to the Cardinals upset over the Titans last week, they’re now tied for the final wild card spot. They got a tough game this week against the division leading Jaguars, but if their defense plays like a did last week look for them to win. Remaining Schedule: @ Jaguars, vs Steelers, @ Colts.

The Bengals took a huge dive with their loss to the Chicago Bears last week. With the Ravens win, the Bengals went from 4th to 9th, which goes to show how quickly things change in this tight playoff race. They have a tough schedule remaining, a loss this week will more than likely eliminate them from playoff contention. Remaining Schedule: @ Vikings, vs Lions, @ Ravens.

The Bills got a big, come from behind, win against the Colts last week to improve their record above .500. They’ll need to put on a much better effort the rest of the way as their final three games are against division rivals. Remaining Schedule: vs Dolphins, @ Patriots, @ Dolphins.

Win, win, win, that’s all the Falcons seem to do. They’ve extended their win streak to 10 last week by beating Drew Brees and his New Orleans Saints and have locked up the NFC South for the second straight year. With their remaining schedule an “easy” one, it will be interesting to see what they do. Do they rest players to not risk injury? or do they want to keep their win streak going and risk a major injury? Remaining Schedule: @ Buccaneers, @ Saints,  vs Panthers.

The Packers got a shutout on the road last week against the Cleveland Browns, winning 22-0. They’ll have to play another solid road game this week as they take on a desperate Panthers team looking to stay alive in the playoff hunt. Remaining Schedule: @ Panthers, vs Vikings, @ Lions

The Seahawks continued their winning ways on the road, they’re now 6-1 on the road this season. This week their back at home to take on the Rams. A win by the Seahawks will earn them a playoff spot and the NFC West for the second straight season. Remaining Schedule: vs Rams, @ Cowboys, vs Cardinals.

The Eagles got back in the win column with a road win against the Rams last week. This week they can clinch the NFC East with a win or a Cowboys loss. Odds are in their favor for both of those things to happen as the Cowboys are playing against the second best team in the AFC, the Raiders and the Eagles face the worst team in the league, the 1-12 New York Giants. Remaining Schedule: @ Giants, vs Raiders, vs Cowboys

The Lions helped their playoff cause by getting a huge win on the road last week against the Buccaneers. The win not only draws them closer to their first playoff birth since Season 5, but also keeps them in the race with the Packers for first place in the NFC North. Remaining Schedule: vs Bears, @ Bengals, vs Packers.

The Rams two game win streak came to an end at home against the Eagles last week. With most of the teams behind them losing last week, they could of extended their wild card lead to a two game lead, but instead that lead has shrunk to just one. They got to dig deep this week to get back in the win column, especially since they will be going up against their division rivals, Seahawks. Remaining Schedule: @ Seahawks, @ Titans, vs 49ers.

Talk about a team that has quietly crept up the standings and into the playoff hunt. The Redskins won their fifth straight game last week by beating the Chargers on the road. They could be the X factor in this playoff race, especially when you look at their remaining schedule which consist of 3 teams with a combined record of 9-29, yikes! Remaining Schedule: vs Cardinals, vs Broncos, @ Giants.

The Vikings snapped their two game losing streak with a gutsy win on the road last week. With the win, they move up past the Panthers on the head-to-head tie breaker. Their remaining schedule is a favorable one as two of the three teams they play are at or below .500. Remaining Schedule: vs Bengals, @ Packers, vs Bears.

The on again off again Cowboys were on it this week, getting a road win against the Giants. This week they take on the best team in the AFC West, Raiders. If they somehow, someway get a win and the Eagles lose, the Cowboys could still have a shot at the NFC East. Remaining Schedule: @ Raiders, vs Seahawks, @ Eagles.

The 49ers suffered a tough loss, on the road, against the Texans. The 49ers offense struggled in that game putting up just 7 points. The good news is their playoff hopes are still alive with the Rams losing to the Eagles. They’ll need help getting in, but first they’ve got to get back to winning this week. Remaining Schedule: vs Titans, vs Jaguars, @ Rams.

Like the 49ers, the Panthers offense struggled in their week 14 match-up against the Vikings. Cam Newton struggled against a desperate Vikings team as he threw zero touchdowns and finished with a QBR of 41.8. This week is do or die for the Panthers as they take on Aaron Rodgers and the Packers. Remaining Schedule: vs Packers, vs Buccaneers, @ Falcons. 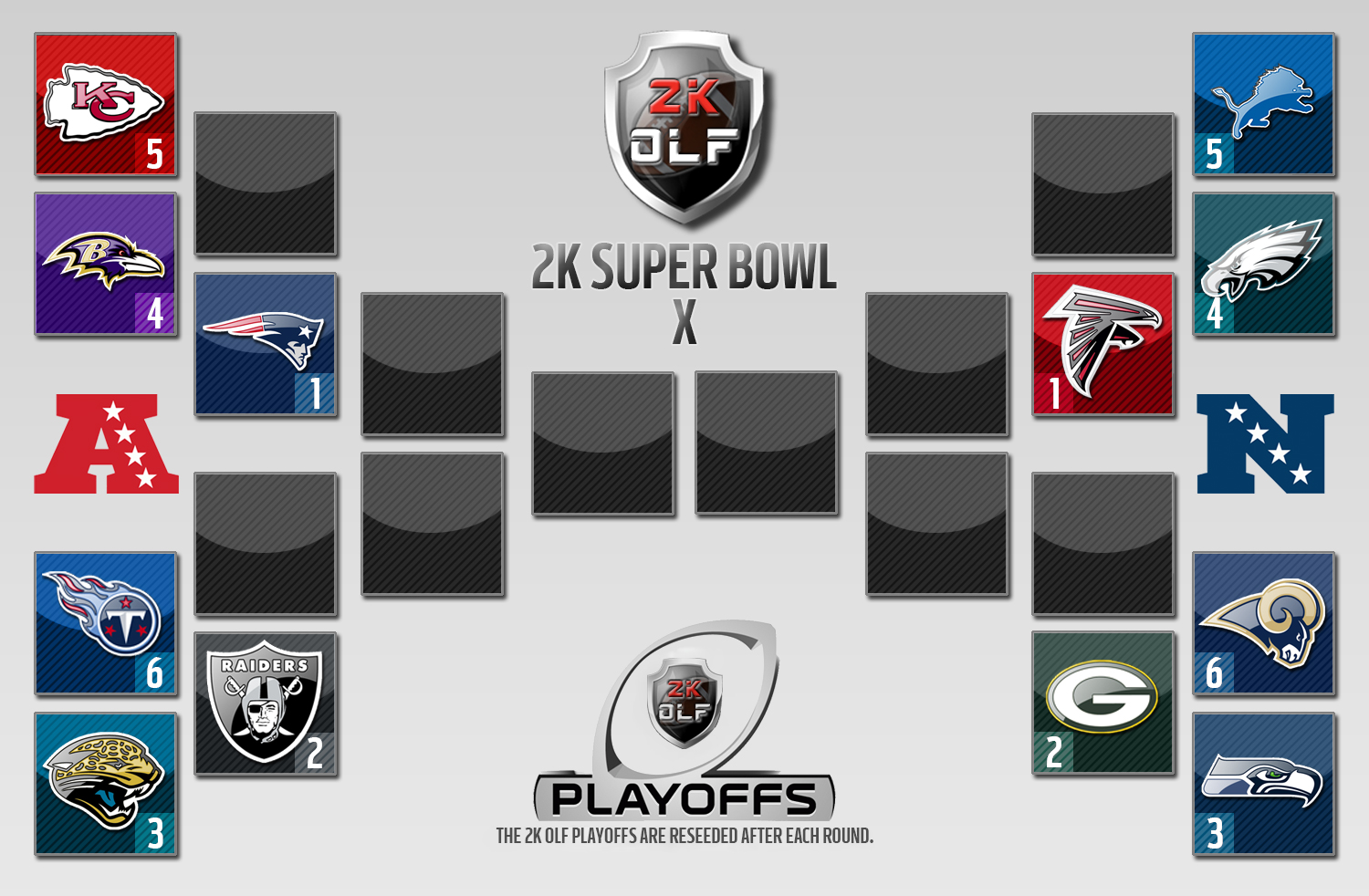