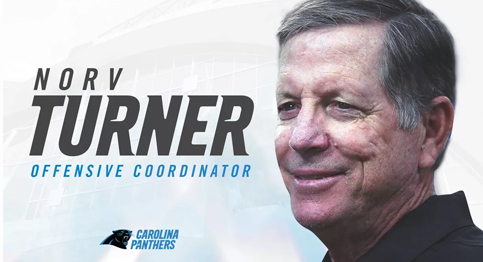 Charlotte, N.C.- In exciting news today the Carolina Panthers have hired long time coach/coordinator Norv Turner. “I’m excited to have him on our staff, i’m really looking forward to spending the off season to learn his system, we all saw how successful LaDainian Tomlinson and Darren Sproles were under him.  I just cant wait to see what he has in store for me I’M READY!” an excited Chrstian McCaffery had to say after learning about who his new O.C would be. It’s not to say McCaffery didnt have an outstanding rookie year, he just got snubbed by QB Mitch Turbisky for rookie of the year honors.

In a year were he caught 64 balls (second on the team) and had over 1000 all purpose yards with 8 scores to go with, you can only imagine the possibility of him getting a new offensive coordinator who is known to put players in situations that best suit them.The thing that makes him special is he knows how to use his players and let them get the ball in there hand to make plays. He’ll definitely need to turn this rushing attack around if they want this offense to turn it around.

The Panthers might opt to cut Stewart and give full faith and control in the second year man McCaffery, but that is just speculation and nothing is set in stone on that.  No matter who is in the backfield they will need to be way more productive if they want to help and take some of the pressure off of Former MVP Cam Newton who is coming off one of his worst seasons, throwing a career high 18 interceptions this season, Newton finished just 20 yards shy of leading the team in rushing, but he had around 50 less attempts…… that will not cut it, and if that happens again we are probably looking at another mediocrity season yet again. I’m interested to see how this team approaches the off season, I hear a lot of talk about going after a big front line receiver and trading off Kelvin Benjamin, but that would probably depend on what free agent receivers hit the market. There are a couple big names set to hit the market, but it is yet to be seen if they will resign in time to avoid that.