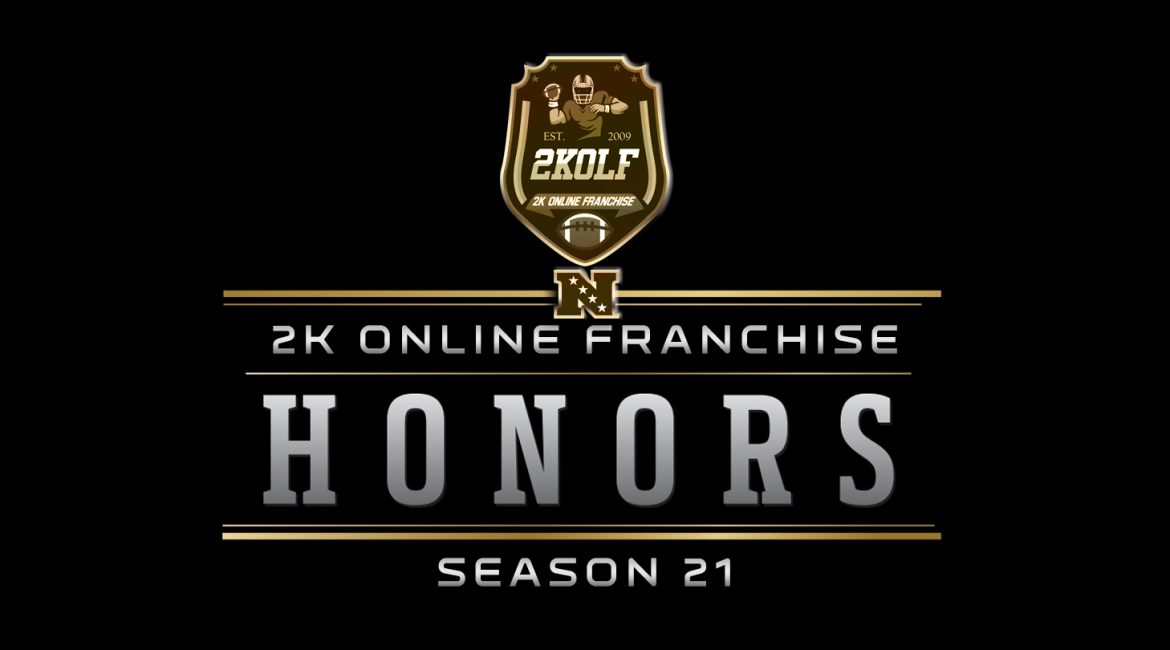 Salem, OR — Now that the regular season is over, it is time to announce the winners of this season’s 2K Online Franchise Honors. We’ll kick things off by announcing this year’s MVP award followed by the awards for NFC players.

First off, we have the 2K OLF MVP award. This award goes to a player that made the biggest impact on his team, whose contributions led to his team’s success and outperformed all other players in the league. San Francisco 49ers half-back Raheem Mostert is this season’s MVP.

Next up we have the NFC Offensive Player Of the Year. Raheem Mostert is the winner of this season’s OPOY award. Mostert finished the season with 330 carriers, 2223 rush yards, 27 rushing touchdowns and through the air Mostert had 88 receptions, 831 receiving yards, and 4 catching touchdowns.

Up next, the NFC Defensive Player Of the Year. This season’s DPOY award goes to the Detroit Lions‘ cornerback Desmond Trufant. Trufant had an outstanding season for the Lions, he finished tied for first in interceptions with 10, had 184 interception yards, 45 tackles, 2 sacks, and 1 forced fumble.

The NFC Offensive Rookie Of the Year goes to the New Orleans Saints‘ half-back Nolan Elliott. Elliott was an outstanding rookie for the Saints as he racked up 1302 rushing yards, averaged 86.8 yards per game, played in 15 out of 16 games, and scored 8 touchdowns for the Saints.

Another Saints player will be getting the next award, the NFC Defensive Rookie Of the Year goes to cornerback Joshua Carter. Carter had a team-high 58 tackles in 16 games, 3 interceptions, and  1 forced fumble return.

We now move on to the best players at different positions.

We’ll start with the quarterback, this year’s Best QB award goes to the Atlanta Falcons‘ own Matt Ryan. The 13-year pro had a great season that helped the Falcons return to the playoffs for the first time since Season 9. Ryan finished 5th overall in passing yards with 4,796, finished 4th in passing touchdowns with 38 touchdowns, and threw 11 interceptions.

The NFC Best-Half award goes to Raheem Mostert. This award completes Mostert’s hat trick with 3 awards, something only a few other players have done in the league.

Moving on to the “O-Line” the Best NFL Offensive Linemen award goes to the Green Bay Packers‘ David Bakhtiari.

Moving on to the defensive side of the ball. First up, the Best NFL Defensive Linemen award goes to the Los Angeles Rams‘ Aaron Donald. Donald was second on the Rams with 11.5 sacks, good enough for 5th overall in the league. He also finished the season with 45 tackles, 3 force fumbles, and 1 force fumble return.

The Best NFC Linebacker award goes to another Rams player, Samson Ebukam. Ebukam led all defensive players in sacks with 13.5, he had 1 interception, 4 forced fumbles, and 36 tackles in the 15 games he played.

Last up in for the defense is the Best NFC Defensive Back award. Detroit’s very own Desmond Trufant gets the award this season.

The last NFC award is the Best NFC Kicker award. This year’s winner is 49ers’ kicker Robbie Gould. Gould was “money” for the 49ers all season long as he missed just 1 field goal out of 21 attempts. His longest field goal made was a 58-yard kick in week seven.

That’s it for the NFC 2K Online Franchise Honors. Be sure to check back later as we announce the AFC winners for this season.