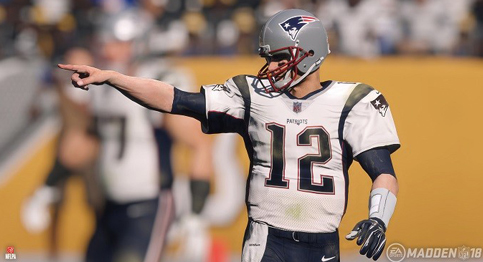 Ah, the quarterback. It’s the only position in football where even the most casual of fan forms an opinion. Whether it’s Peyton Manning who could apparently do no wrong, or Jay Cutler who could, well, he was sort of the opposite of that, QBs are the most recognized players in football.

Just like in the NFL, a solid QB is the foundation of Madden offensive success. Here, we take a look at the top five signal callers in Madden NFL 18.

Wait, do you hear that? That’s the silence of Brady’s critics. He’s the G.O.A.T. You get to be named that after winning five Super Bowl rings, the most recent of which was won after the greatest comeback in Super Bowl history. For that, he’s earned his spot in the coveted Club 99. Inside sources here at EA say that this was Brady’s biggest goal all along. I’m basing that on a complete lack of inside sources though, and have zero evidence to support that theory.

If Brady is in Club 99, then Rodgers is the first guy in line outside, wondering if he dressed right for the occasion. You could argue that Rodgers has the greatest set of intangibles at the QB position. There just isn’t a single throw he can’t make. To prove it, his Throw on the Run rating is an outstanding 97, the best in the game. With Rodgers at the helm, your offense is scoring. It’s just that simple.

Brady might be the G.O.A.T., but Matt Ryan was the best QB of 2016. He led the league in most passing stats. and starts the year with a 96 OVR. Which isn’t bad when you consider he started last year at, let’s see here, at 84! Ryan performed so well that he climbed that high in just a year. He earned his spot among the Madden elite.

Brees has been among the top Madden QBs for years. He’s a methodical pocket passer and it shows in his ratings. His Awareness is 99, the only QB besides Brady to score that high. He moves well in the pocket, too, with a Juke rating of 70, which should come in handy whether it’s running for a gain or shaking past an edge rusher.

With a 91 OVR, Big Ben rounds out Madden 18’s top five signal callers. Roethlisberger is a tough QB to bring down. For that, his Strength rating is 82, strongest among QBs and providing some second chances on offense if pass rushers can’t bring him down. With a 93 Throw on the Run rating, he’s second only to Rodgers. Whether it’s after the line collapses and you’re extending the play, or throwing with his feet set, few in Madden are better than Roethlisberger.

The last two QBs rated 90 or above are Russell Wilson and Andrew Luck, but let’s talk about some guys that could be on the rise once the season starts. Cam Newton is starting this year at 88 OVR. Last year was one to forget for Super Cam. Look for him to climb back into the 90s quickly. Historically, the Carolina Panthers’ offense doesn’t throw to running backs very often. They clearly look to change that up by drafting Christian McCaffrey.

The Dallas Cowboys’ new signal caller is doing everything he can to avoid a sophomore slump. One thing to consider, Dez Bryant. Prescott and Bryant didn’t have much chemistry last season. With an offseason to work on their game, look for Prescott and Bryant to establish themselves early in the season and for their ratings to climb.