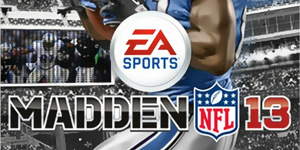 The news just keep getting better for EA and Madden 13 sales. According to EA sell-through for Madden NFL 13 was up 8 percent year-over-year on HD platforms with more than 1.65M units sold in Week One to mark its best start ever on this console generation. Last week, EA announced that Madden NFL 13 had set a new Day One record on HD consoles as well.

Hopefully this will motivate EA to push harder for an even grater game next year and not sit back or push small updates next year because they are too scared to mess with the success of this years Madden.

REDWOOD CITY, Calif.–(BUSINESS WIRE)– Electronic Arts Inc. (NASDAQ: EA) announced today that Madden NFL 13 continues its record-setting launch performance with new records for both sales and fan engagement through its first seven days at retail (Aug. 28-Sept. 3). Based on internal estimates, sell-through for Madden NFL 13 was up 8 percent year-over-year on HD platforms with more than 1.65M units sold in Week One to mark its best start ever on this console generation. Last week, EA announced that Madden NFL 13 had set a new Day One record on HD consoles as well.

Fans also continued to play Madden NFL 13 in record numbers. In the first week following retail launch, there was a 31 percent increase in the number of online games played year over year with more than 24M contests recorded. That’s the equivalent of a staggering 47,000 NFL regular seasons in just seven days, and, on Labor Day alone, an average of 3,000 Madden NFL 13 games were started every minute. In addition, Daily Average User (DAU) rates on HD consoles have increased 14 percent over last year, shattering previous franchise records.

“We’re thrilled to see the great momentum continuing on Madden NFL 13,” said Andrew Wilson, Executive Vice President of EA SPORTS. “The overwhelming feedback is that this is the best Madden NFL game in a generation. Fans are competing in record numbers, and we expect that type of engagement to only grow with the start of the NFL regular season last night, as fans connect with their favorite teams and players through our game.”

“We have seen strong demand for Madden NFL 13 leading up to launch and through its first week on store shelves,” said Bob McKenzie, SVP of Merchandising, GameStop. “Critic reviews are strong and the buzz from the Madden fan base is more robust than I’ve ever seen. We’ve seen this consumer momentum sustain throughout week one and we expect it to continue into the fall and holiday season.”

Among the additional notable accomplishments for Madden NFL 13 in its first week at retail:

Madden NFL 13 on the Xbox 360® videogame and entertainment system and PlayStation®3 computer entertainment system delivers physics you can feel on every play, and will connect you to the NFL and other fans like never before. Powered by the all-new Infinity Engine, every impact on the field is more intense; every battle is more authentic; and no two plays will every look or feel the same. With Connected Careers you’ll build your legacy as a player or coach within a completely new and fully connected universe, accessible on and off the console. With deep new gameplay innovation, social integration, and an overhaul of the audio and visual presentation, Madden NFL 13 is the biggest game-changer in the history of the franchise.

All player participation has been facilitated by National Football League Players Incorporated, the licensing and marketing subsidiary of the NFL Players Association.

In fiscal 2012, EA posted GAAP net revenue of $4.1 billion. Headquartered in Redwood City, California, EA is recognized for a portfolio of critically acclaimed, high-quality blockbuster brands such as The Sims™, Madden NFL, FIFA Soccer, Need for Speed™, Battlefield™ and Mass Effect™. More information about EA is available at http://info.ea.com.

“PlayStation” is a registered trademark of Sony Computer Entertainment Inc. Xbox and Xbox 360 are trademarks of the Microsoft group of companies and are used under license from Microsoft. Wii is a trademark of Nintendo.