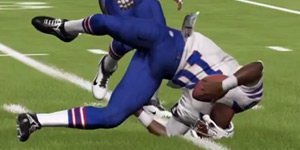 Madden NFL 13 may be polished, but no game is perfect, so some bugs have appeared. If you wish to add to this list, be sure to describe the bug in as great of detail as you can, and on what console(s) you have experienced it, as well as any workarounds that you have found. If it’s patched, be sure to update your entry!

Remember that poor playing is not a bug. If you keep falling for Hail Mary passes, that play isn’t necessarily broken; you just need to read our Basic Defense section for more tips!

When kicking field goals, punts, or kickoffs for Special Teams, the indicated wind direction shows the opposite wind direction it should. Or, more accurately, it shows the wind direction from the receiving team’s point of view, rather than the kicking team, regardless of the camera angle.

You can work around this just by aiming your kick in the same direction the point of the arrow is. So for example, if the arrow is pointing to the left, the wind is actually coming from the left… ergo, you should aim left, so the wind pushes the ball to the right.

This bug affects all game modes.

With the “Salary Cap” option enabled, after a couple seasons in Be a Coach Connected Careers, the game may incorrectly calculate or display your spending money, preventing you from doing mid-season signings. (Note: this might be connected to cap penalties due to releasing players with a bonus, but logically, the “Spending Money” entry should take that into account.)

Patched as of September 16, 2012.
Player Illegally Makes a Catch on the Sideline

Unlike real NFL rules, a player is considered to have made a catch if both feet are in-bounds when he makes contact with the ball, not necessarily when he catches and maintains control. Use your coach’s challenges carefully on these plays.

Patched as of September 17, 2012.
Punt/Kick Returner Dances on the Target

When a kick (usually a punt) is airborne, the punt returner sometimes dances around the target while under AI control. Oftentimes this results in a muff or the player missing the punt entirely.

A current workaround to this bug is to take manual control of the returner, if you can do it fast enough. Switch to the player with B (Xbox 360) or Circle (PS3) while the ball is in the air, then hold LT (Xbox 360) or L2 (PS3) to Strafe. Move the left stick gently to ease him dead-center to the spot.

While on defense, if the offense sends a man in motion, pulling the right trigger makes the defensive play art not appear on the field. This doesn’t affect the play — everyone will still blitz or cover as dictated — but the art isn’t there, even if you audible out or change an individual coverage.

Mostly patched as of September 16, 2012, but it still rarely pops up.
Schemes Don’t Stick

When playing Be a Coach, you can change your player type preferences in the Strategy | Schemes screen. (For example, if your default team strategy favors speed receivers, you can change it to possession receivers instead.) However, any changes to this section doesn’t save when you exit the mode, even if you’ve done a full save.

Note that changing player preferences doesn’t actually affect anything other than the modified overall rating. Say you have nothing but speed receivers, and then you switch your preference to a possession receiver. Your players don’t actually change, but your receivers’ overall ratings will go down a bit. This won’t affect their on-field performances, but it will throw off the overall rating of your team.

What is the craziest bug you have ever seen in any Madden?