Running the ball is one of the most common things you do in Madden whether returning a kick, getting yards after a catch or simply taking the handoff.  It can also be one of the most rewarding aspects of the game when you leave a defender in the dust with a perfectly timed special move. So we set out to give new creative controls for all levels of Madden players on Xbox One and PlayStation 4. Let’s start with Special moves.

Each on-field player in the game will perform special moves that fits his playing style and ratings. Special moves are now spread out across all the different player-types in the NFL: Bruising backs have better trucks & stiff-arms while smaller backs have better jukes & spins and all are new animations for Madden NFL 17.

Based on the special-move ratings (and body weight in some cases), ball carriers will use an animation that ranges all the way from ‘Elite’ to ‘Lumbering’. Elite moves are the best moves Madden has to offer and are reserved for the truly upper-class ball carriers – those with the corresponding move rating in the 90’s. These moves give the runner the highest chance of success when timed correctly.

For those ball carriers with special-move ratings in the 70’s and 80’s, they’ll get versions of the special moves that aren’t quite as explosive as the elite moves, but can be effective nonetheless when timed correctly.  These moves are a bit less efficient and highlight-worthy than the elite moves.

The ‘lumbering’ moves are the slowest, lowest impact moves that carry very little reward.  These moves are used exclusively by players who are over 300 pounds without having any ball-carrier rating above 65 – don’t expect to appear on the post-game highlight reel when scooping a fumble with the 320-lb defensive tackle!

Also noteworthy is the impact fatigue can have on the special moves. When the ball carrier is completely out of stamina, the moves he will use will go down one level from his default – when an elite player runs out of gas, he’ll perform moves as if he’s rated in the 80’s instead of the 90’s – so make sure not to overuse that Acceleration Burst! 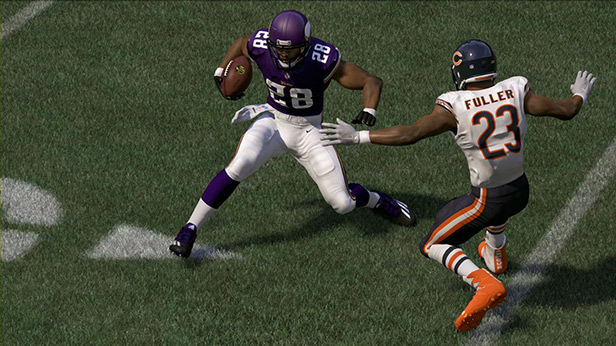 To accompany the new special moves, the fakeout system has been overhauled to deliver a new experience to the ground game.  When timing the special moves correctly, users can see and feel the power of new multi-player fakeout animations, with nearly a thousand possible outcomes.

What is a multi-player fakeout? It’s a dynamic animation that includes multiple players all at once based on their location. This can now be many players, all depending on the type of move used, the ball carries skill level and the user’s own stick skills.

Being able to successfully fakeout defenders takes more than just timing.  The user first must know his ball carrier and his best moves. In addition, recognizing where the defender or defenders are that you’re trying to evade is critical because each move has an ideal zone in which the success chance is increased:

When attempting, say a hurdle, the ball carrier will have far more success eluding the defender when he’s directly in front of the runner rather than pursuing from side. 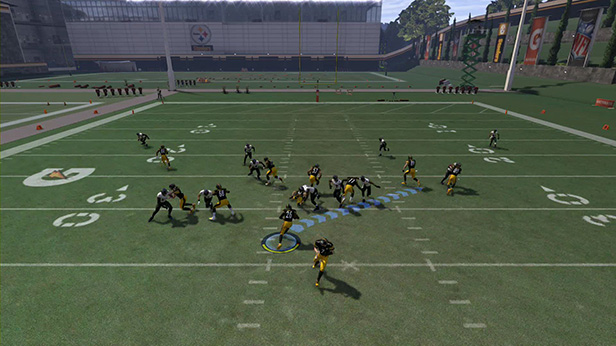 Madden NFL 17 will feature a broad cast of new Ball Carrier mechanics to keep all Madden players engaged, from beginners to the hard core. Using modifiers, there are now four unique tactics available to customize the running game. In combination with the Fakeout Interactions, all carry their own risks and rewards.  The four special-move types are: Standard, Speed (RT/R2), Precision (LT/L2) & Steerable (RT/R2 + LT/L2).

Standard Moves – Standard moves are executed by simply pressing the button while NOT using either modifier. The ball carrier will perform a ‘standard’ move based on their special- move rating for the corresponding button-press: Spin, Stiff-Arm, Dive, Hurdle, Juke, Back Juke and Truck – all paid off with new animations for each. Standard moves carry the base risk for stamina, fumble and injury and can fakeout as many as two defenders at one time.

Speed Modifier – Speed Moves are short, quick moves that can be pulled off at full speed while not veering off the path the ball carrier is currently on. These moves are performed while holding or pressing R2/RT (Accel Burst) + the corresponding special-move button.  Again, the quality of the move is based on the player’s ratings with all new animations. Users will now have to perfect the skill of laying off the gas pedal on RT/R2 and mix in changing up speeds when running the ball. Speed moves carry the lowest risk for stamina, fumble and injury and can fakeout one defender at a time.

Precision Modifier – Similar to Madden NFL 16, Precision Moves can be performed while holding or pressing the Precision Modifier on L2/LT + the corresponding special-move button. These moves are longer and more deliberate than Standard and Speed moves, but can fakeout multiple defenders at once – the better the running back is via his move-rating, the more explosive these moves will be. Precision moves carry the highest risk for stamina, fumble and injury.

Steerable Modifier & Utility Moves – For users with elite finger dexterity, most special moves can be steered by holding down both modifiers while performing a special move (L2 + R2 + Special-Move Button/LT + RT + Special-Move button). Steerable moves offer the most control due to the user having the ability to choose the direction of the move via LS input. However, these moves don’t use the fakeout interactions – they instead influence the defender’s pursuit angle. Steerable moves carry the base risk for stamina fumble and injury. Also, not all moves are steerable – here’s a list of applicable moves for reference:

Utility Moves – For the move-buttons that aren’t steerable – Dive and Stiff-Arm – they double as specific-use utility moves – using both modifiers + the corresponding button. Here’s a list of the utility moves:

Hurdle is not steerable, both modifiers result in a Precision Hurdle

There’s also a new mechanic in the run game that can be used on both offense and defense – Tackle Battles. This is a twitch mechanic that gives uers the ball the ability to influence the outcome of tackles as both the ball carrier or the defender making the tackle. 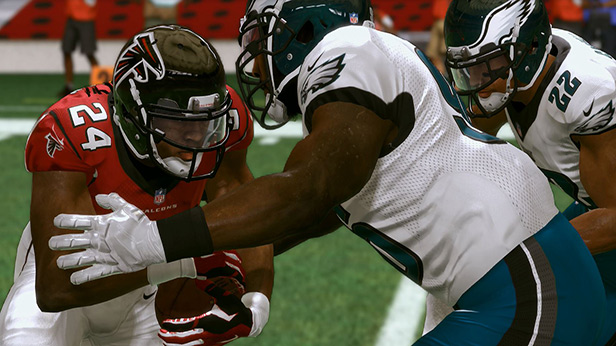 Recommended Special-Move Prompts – On Rookie and Pro by default, you’ll see special move prompts above the ball carrier that serve as a recommendation for both the proper move to use for your ball carrier’s skill. Since this is a recommendation, you can follow it and hit the given button, or free-style it and perform the move you want. These can be toggled ON/OFF via settings, but more on that to come.

Special-Move Feedback Text – On Rookie and Pro by default, when using the special-move mechanics, you’ll be given feedback text about your timing in the fakeout window – Early, Late or Perfect.

Projected Path Indicator – On Rookie and Pro by default, there will be a path on the field showing the direction the ball carrier is currently headed based on the stick-input of the user.  The path will help users anticipate obstacles when navigating through the line and visually assist by letting you see when you should turn to avoid the obstacles. This is best used to align your projected path with a hole in the line of scrimmage, then hit sprint (R2/RT)  when the path is clear.

Ball Carrier Threat Cone – Used exclusively on the ‘Assist’ setting (more on that shortly), the threat cone is a visual indicator to show you the fakeout zones within the fakeout interaction system for the move being recommended to you.

All these new tools are meant to be teaching tools for users who want to get more comfortable running the ball and onboard users of all types into the new and improved run game experience.

There are three unique ways to experience running the ball via the Ball Carrier Special Moves setting, which allows the user to customize the ground-game experience to his or her own liking:

Auto – When using the Auto setting, the AI will perform Ball Carrier Special Moves for the user, using the proper timing and with an increased emphasis on using the highest tiered moves for that player. this is meant to introduce you to the new mechanics and show you their power as your ramp up. The user just needs to steer the ball carrier into the open lanes and the AI will take care of the rest. The Auto setting will teach users the proper timing for the new special move mechanics as well as a full display of all visual feedback. This will be ON by default on Rookie and Pro skill levels and can be toggled ON/OFF for any skill level via the Gameplay Settings menu for all Offline game modes. For those that just want to optimize to the fun and wow moments, Auto Moves will be your new way to play.

Assist – When using the Assist setting, AI will determine the best type of move to use based on the button pressed by the user (Standard/Speed/Precision), as well as the best direction for the move. The Assist setting will allow the user to choose when to use a special move and what type of special move to use, but the user won’t have to use either modifier as the AI will choose the best move type possible for the situation. The Assist setting will also feature all the visual feedback of the Auto feature, but will show the user the Ball Carrier Threat Cone, which displays the range and direction in which the ball carrier is most likely to successfully fakeout a defender. This will be an option that can be toggled ON/OFF via the Gameplay Settings menu across all skill levels for any offline mode and will NOT be used by default on any skill levels.

Manual – When using the Manual setting, the user is in full control of all Ball Carrier special moves. This setting lets the user decide when to do a move, what move-type to use (Juke, Spin, Hurdle, Stiff Arm, Back Juke, Truck, etc.), the direction in which to execute the special move (Steerable) and when to use either modifier (Precision, Standard, Speed). There will be no visual feedback for the user when using manual and is tailored for more experienced users who want a fully customizable run-game experience. This setting will be ON be default on All-Pro and All-Madden, as well as all online game modes, but it can be toggled ON/OFF via the Gameplay Settings menu across all skill levels for Offline modes.