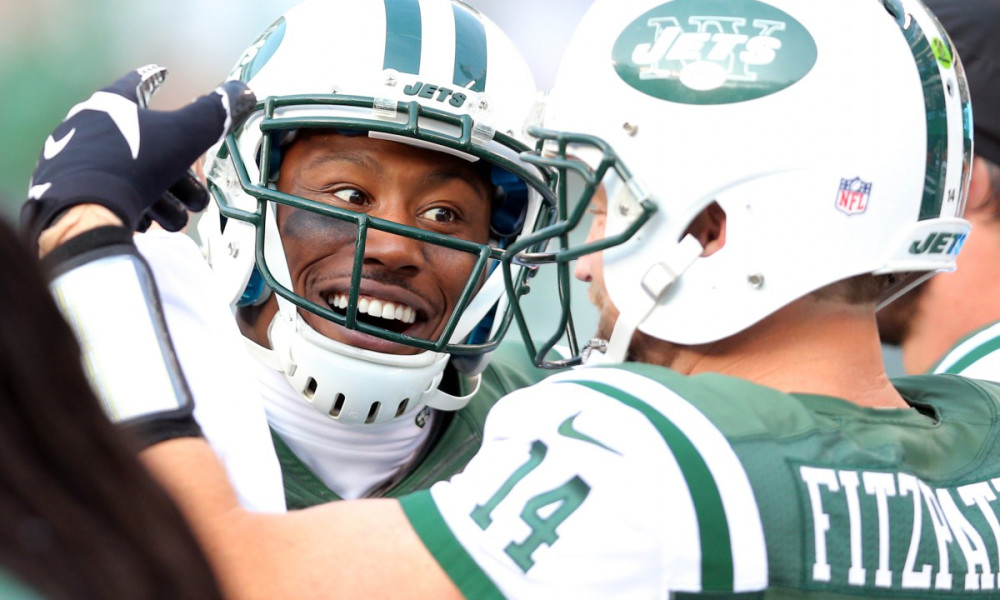 East Rutherford, NJ. — Ryan Fitzpatrick was back in as the New York Jets quarterback after getting benched last week. The time off seemed to have worked as Fitzpatrick played his best game since week 2. Things started out bad for the Jets as the Baltimore Ravens jumped to a 17 nothing lead in the first half, while the Jets looked bad on offense as they had just eighty nine passing yards and a mere two rushing yards.

“It was embarrassing to see that kind of effort from our team and I let my guys know that during half-time.” said Jets coach Todd Bowles of his team’s performance.

As the second half started the Jets seemed to have listened to their head coach. The Jets stopped the Ravens on their first possession of the half and two plays into the Jets first drive of the 3rd quarter, Fitzpatrick found a wide open Brandon Marshall who took it in for his first touchdown of the year, cutting the Ravens lead 17-7. The Ravens were unable to do anything with the ball on their next drive, forcing the Ravens’ Sam Koch to punt on 4th down. Koch’s punt would be a short 25 yard punt, setting the Jets up at the Ravens 42 yard line.

The Jets once again wasted no time in scoring, this time on the third play of the drive; Fitzpatrick threw a medium pass to his tight end Kellen Davis who ran it 48 yards into the end zone, cutting the Ravens lead to just three points.

The 4th quarter began with the Ravens in a sense of urgency that would lead them to an early touchdown by Crockett Gillmore. The touchdown extended the lead back to 10 points for the Ravens. Jets however, didn’t panic and with less than six minutes left in the game the Jets went into a two minute drill to move the ball up the field. A few plays later the Jets would once again score on another Fitzpatrick pass, this time it was the full back Will Taʻufoʻou in for his first touchdown of the season and once again, putting the Jets within three points of tying the game.

Following the Jets extra point, Jets’ kicker Nick Folk kicked off the ball to Ravens wide receiver Steve Smith Sr. Smith Sr. from the five yard line, took it up the right side of the field and broke free for a 71 yard kickoff return. He would have taken it in for a touchdown if not for the Jets speedy corner back Juston Burris, who tackled him at the 24 yard line. The Ravens were set up perfectly to extend their lead with less than 5 minutes left in the game.  Fortunately for the Jets, their defense was able to stop the Ravens from getting a first down and on 4th and 8 the Ravens brought out their field goal unit to try and extend the lead to 27-21 but, like many teams have figured out this season; field goals are not automatic anymore. It was on this play that the Jets season might have finally taken a turn for the best.

Justin Tucker lined up for the field goal try and just as he was about to kick the ball, in comes the same player that stopped Smith from scoring a touchdown on the kickoff, Juston Burris dives across to block the field goal sending the ball back and allowing Jets safety Calvin Pryor to pick up the loose ball and run in back 78 yards for a touchdown!! Following Nick Folks extra point the Jets were up 24-28 with 3:37 left in the game. The Ravens on their next possession were unable to do much with the ball and were forced to punt once again. The Jets, for the most part, played it safe on their final possession by running the ball three times and forcing the Ravens to use all of their three timeouts. The one mistake the Jets made was trying to pass the ball on 3rd down, the pass was incomplete which stopped the clock with 1:34 left in the game and forced them to punt on 4th down.

Things were looking bad for the Ravens as they started their final drive at their own 37 yard line. But, with Joe Flacco as quarterback never underestimate their ability to pull off a miracle. On 2nd and 10, Flacco dropped back and threw up a pass to Steve Smith for a gain of forty yards. 1:04 left, the Ravens quickly lined up at the Jets 24 yard line and Flacco once again made a smart throw, this time to wide receiver Kamar Aiken. Aiken stepped out of bounds at the 12 yard line to stop the clock with 52 seconds left.  Two plays later, Flacco finds Crockett Gillmore open inches away from the two yard line. 3rd down and inches, the Ravens hurry up to the line, Flacco out of the shot gun drops back, looks at the middle of the end zone and throws a pass to Gillmore, he made the catch but was out of bounds with 27 seconds left in the game. With the game on the line the crowed was roaring, cheering the Jets defense to make one more stop on 4th and inches. The Ravens lined up in the I formation, Flacco snaps the ball, fakes a hand off to his fullback and as he tried to pitch the ball back to his running back he got dropped behind the line! The crowd went wild and the J-E-T-S…JETS! JETS! JETS! Go on to win one of the wildest games this season.

Up Next:
With the win the Jets improve to 3-4 and extend their win streak to two games. Next week they will go on the road to take on the Cleveland Browns. The Ravens will have a long time to think about this loss as they go into their bye week with a record of 2-5. They will be back in action at home in week 9 against the Pittsburgh Steelers.