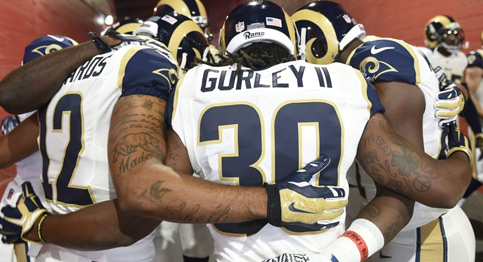 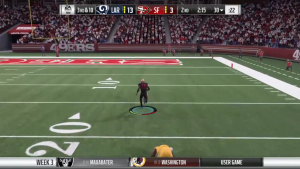 Santa Clara,CA — The 2-0 Los Angeles Rams traveled up north to the Bay Area to take on the 2-0 San Francisco 49ers. What a perfect setting to make a divisional statement for both teams, Thursday Night Football, bright lights, and a national audience.

The Rams came out strong as they build up a 10-3 lead in the first quarter. The 49ers could not stop new nucleus of an offense that Rams head coach Sean McVay put together. Rams HB Todd Gurley II had a strong 1st half even though he left the game with a wrist injury. In the 2nd quarter the 49ers began to hit strike offensively as they were able to put up 14 pts to the Ram’s 6. Carlos Hyde would leave the game after his first carry with what later team doctors diagnosed a broken collarbone. We head into halftime with the score of LAR-16 SF-17

2H- Both teams were unable to put up any points in the 3rd as the defensive would tighten up. With Gurley no where to be found rookie rb Justin Davis from USC picked up where Gurley left off gushing the 49ers new 4-3 Defensive look. JD would finish the game with 42 yards averaging 5.3 a carry. With the 49ers left without Carlos Hyde they were forced to put the ball into rookie QB C.J. Beathard’s hand. What sealed the deal for the Rams is when Gurley made his return and finished what he started. Gurley would finish with 144 yards on 15 carries averaging 9.6 per carry.

We had a chance to catch up to coach Nguyen as he had this to say. “They were the dominate team out there tonight but we were able to just hang around and make a late push for the W. 21 first downs to our 9 is not going to get us Ws, our defense was ranked #1 and they really just came out here and exposed us in many ways. We look forward to our next date in LA no doubt.”

The win puts the Rams alone on top of the NFC West where they never been in years. The season is still young as the Rams make a statement to the league that their contenders this year.

RB Todd Gurley II returned from his wrist injury and looked ok,expect to see him limited during this weeks practice