Gruden returns to the Raiders to assist Farias 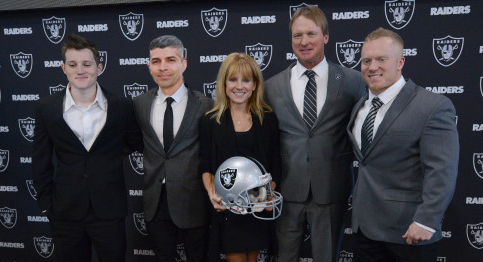 Oakland, CA — Big news coming out of Raiders headquarters in Alameda. The Oakland Raiders have brought in former coach Jon Gruden to become assistant head coach and offensive coordinator. This comes at a time where team management and personnel are being shifted to best fit the organization.

Coach Farias will remain as head coach but he will focus on his strengths which will be coaching on the defense and developing players. Reggie McKenzie will be more focused on player salaries.

“It feels great to come back to where it all started for me. I love the city of Oakland, the fans, the Raiders and the entire culture of this fan-base. I’m excited to work alongside Coach Farias. I can’t thank him for giving me the opportunity to come back to coaching and do what I love. I understand

that I will be controlling the offense and being part of the brain trust when it comes to scouting and the draft. I am not here to step on Coach Farias’ toes or undermine anyone. He is the one that wanted me here and convinced me to give up my tv gig.”

Gruden was signed to a whopping ten year deal worth $100 million dollars. Coach Farias is signed for the next three seasons. Could this possibly be a sign that Gruden might take over if owner Mark Davis decides to get rid

of Coach Farias? “Max’s future with the Raiders just got better” says Davis as he takes questions from reporters. “We plan to keep him as long as he wants. I don’t want to talk about Gruden’s contract because we deal with that in house. We have a plan for Coach Farias to remain with the Raiders long term. We will deal with that when the time comes.”

“I don’t care about how much money Jon or anyone else is making” says Coach Farias. “I’m just happy he is here and interested to give this another shot. I’m actually happy with what I am making. The Raiders have been great to me and my family. I cannot ask for anything more. I just want to coach and do my part to keep this team competitive and contending for the title.”