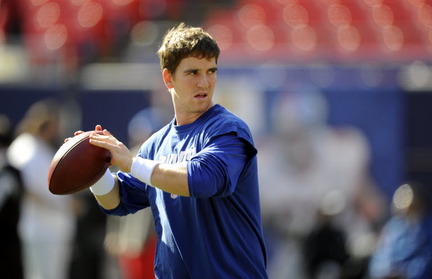 East Rutherford, NJ. — The New York Giants are once again looking for answers following a disappointing loss to the Los Angeles Rams in London.

Coach Jeff Jarin met with the media today following a practice that focused on a passing game that has been lacking. “It’s been a tough first half for us. As the head coach I haven’t done my part in getting these guys ready, or ready enough to be able to go out there and be prepared for what it takes to win day in and day out.”

Not all the blame lies on the shoulders of coach Jarin though. Eli Manning has also had his fair share of struggles this season. Manning has ten interceptions, five touchdowns, and a quarterback rating of 73.5 which is second to last among NFC East quarterbacks.

Manning’s career has always come with ridicule and praise.

Much of that he brushes off, knowing it’s just the nature of the position and especially in the metropolitan area, where he has provided elation as much as he has caused frustration at times with a lack of regular-season consistency.

With the Giants sitting in last place, at 2-4, and seeking to snap a four game win streak, Manning embraces the challenge that comes with failing to deliver to a team that depends on a player as much as this franchise does him.

“When the offense is not playing up to standard, you’ve gotta look at the quarterback,” Manning said. “That’s just the way it goes. I understand that. I understand I gotta play at a higher level. Making the plays I’ve gotta make, getting the guys around you to raise their level of play — it all has to be a team effort to get it done.”

As the Giants have struggled with just two wins in seven games, so has Manning.

At age 35, Manning insist he feels fine and doesn’t plan on changing anything with his preparation, which has always been a strength.

After practice a reporter asked Manning to assess his performance so far this season.

“Doesn’t matter. I didn’t play as well as I needed to last week,” he said. “I missed some throws. So I need to play better, I have to make some more throws, better decisions, can’t turn the ball over, but we will improve.

“We will keep working hard and we will figure it out.”

Coach Jarin and Giants will look to Manning with strong believe that he – and in turn, they will too.