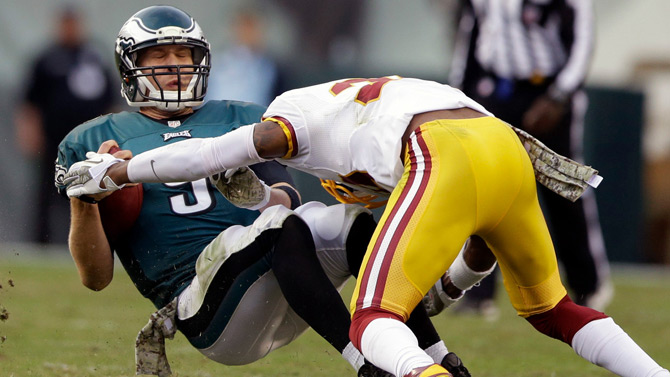 PHILADELPHIA, P.A. — The Redskins are looking like they will be the team to beat come playoff time, thanks to their outstanding performance tonight against the Eagles. The Redskins got out to a big lead scoring 21 unanswered points in the first half and they continued their scoring streak by scoring another touchdown on the kickoff to start the second half.

Down 28-0 the Eagles struggled to do much on offence scoring just 2 field goals and a last minute touchdown. “We struggled for sure today. We’ll have to sit down and look at the tape to see exactly what we did wrong.” said Eagles’ quarterback Nick Foles who had only 52 passing yards and completed 5 of 12 passes.

The Win for the Redskins keeps them in first place, not just in the NFC east but now moves them ahead of the Seattle Seahawks for first place in the the NFC. For the Eagles the loss is a costly one, as it knocks them down from 5th place in the NFC to 7th place.