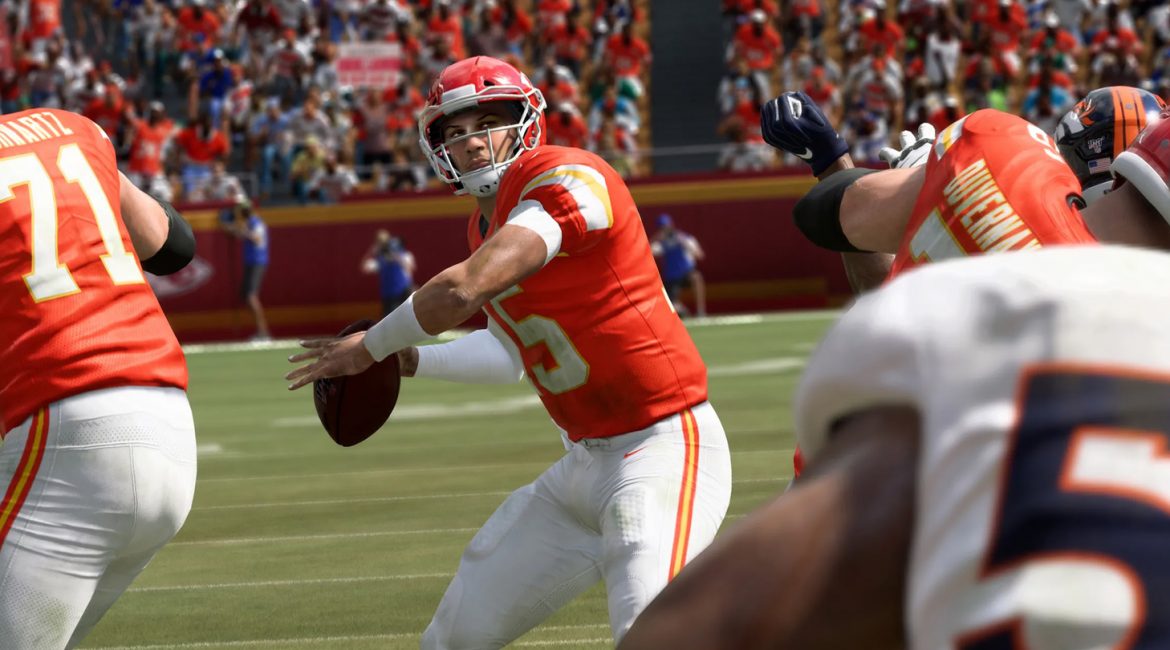 Hey Madden Fans, Clint Oldenburg back again, Senior Gameplay Designer from the Madden NFL development team. We have more to share on how we’re going after our feature set for Madden NFL 20, but first we wanted to quickly reiterate our focus by targeting these three primary creative pillars, all driven by player feedback:

In Part 1 of our Gameplay Deep Dive series, we broke down Superstar X-Factors, Signature Animations, Passing Animations and Trajectories, Immersion and Quality Polish, Pass Rush, User LB’s and more. Here in Part II, we’ll focus on playbooks and details on the new run-pass option (RPO) addition to Madden NFL 20. With that, let’s dig into Part II of our Gameplay Deep Dive and check out more new features!

Not only will the players on the field change the way the game is played, but the unique playbooks and schemes we’re bring to Madden NFL 20 will have an impact on the game-to-game strategy as well. The playbooks have been modernized to reflect each NFL team’s unique identity.

The major addition that the development team is the most excited about, and which will also have the most strategic impact, is the introduction of RPOs (Run-Pass Options). This unique play-type is something that both the community and the Dev team have really wanted for a long time – the offensive scheme that is taking the NFL by storm is coming to Madden NFL 20! Playbooks will be filled with hundreds of new RPO plays, coming with new mechanics to learn, and three specific types of RPO plays: Alerts, Peeks, and Reads.

To execute RPOs to their full potential, you’ll want to get comfortable with the new mechanics first. On the Alert RPOs, you will be able to abort the handoff by pressing a receiver icon to throw the ball at any time before the mesh is complete. On the Peek and Read RPOs, the mechanic is similar to that of the Read Option plays you’ve become accustomed to – hold the A/X button to handoff or press a receiver icon button to throw the ball either before or after handoff is complete. And the timing of these plays is just as important as the mechanics – since the offensive line will be in full run-block mode, you’ll need to make sure to get the ball out quick enough to avoid getting flagged for having illegal blockers downfield. You will not be able to hold on to the ball long enough to take advantage of deeper routes on RPOs.

Once comfortable with the mechanics of these plays, you can start to learn the details of the three types and how to best utilize them for your scheme.

As described above, this type of RPO is more like a Smoke read or a box-count read than a read on an individual defender. When you call this play, it will be run just like a standard running play – if you don’t abort, the handoff will complete as normal. However, the handoff can be aborted at any time to throw to one of your designated “hot” receivers by pressing a receiver icon button. These plays will be most beneficial when making pre-snap reads of the defense, either by looking at the hat-count to see if you have an advantage in the running game, or by looking at the depth of the defensive backs to see if you have room for a quick throw out to the receiver. Many of the base running plays you’ve built your schemes around in the past, like Stretch, Inside Zone, and Power, will now be tagged with Alerts on them to give you the choice to run or pass out of these looks.

The next type of RPO is the Peek, also known as the 1-Read. On these plays, you will read a single defender, who will be denoted as the Pass read in Coach Cam, to determine if you want to run the ball or throw the ball. Based on the Pass Key defender’s behavior, you can either hold down the A/X button to hand the ball off to the running back, or quickly press the receiver icon to throw the ball at any point before the handoff mesh completes. This mechanic is very similar to the Read Option mechanics you are used to, but the biggest difference is you will be able to branch out of the handoff at any time to throw the ball by pressing a receiver icon button.

The final type of RPO is the Read, or 2-Read. The reads on these plays are just like the Triple Option plays you’ve seen in the past, as you’ll be reading both the Run key and the Pass key before and after the snap. Based on their behaviors, you will have three options to choose from: you can hold down A/X to hand the ball off, you can press a receiver icon button before or after the handoff mesh is complete to throw the ball, or you can keep the ball and scramble with your QB. There will be some On-Field Trainer coaching the first couple times you run these plays (as long as that setting is not toggled off) to help get you more comfortable with making the right reads on these plays.

Outside of the cutting-edge addition of Run-Pass Options, each offensive playbook has been built to emphasize the unique identities of each team, to closely match what you see them run on Sundays, including:

A variety of team-specific passing concepts

Lastly, due to the work we did via Title Update in Madden NFL 19, we plan to fully utilize our ability to support playbooks all year long. Regular updates will ensure that the plays you are using in Madden are the most up-to-date with the NFL as possible.

To close, the Madden Development Team is extremely excited for you to get your hands on Madden NFL 20. Superstar X-Factors will make the stars feel like stars, while you utilize a variety of modern NFL schemes and strategies to compete with your friends for Madden supremacy in a polished, immersive, and authentic NFL experience.