Derek Carr and the Raiders move on to the divisional round 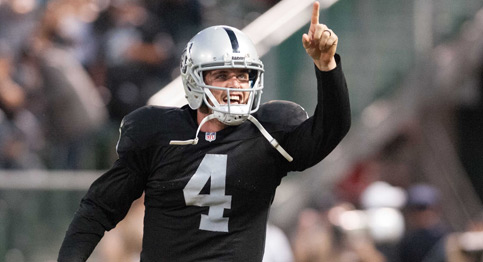 Oakland, CA – The Buffalo Bills entered the playoffs as one of the hottest teams in the league. They had won five in a row and were looking to extend that win streak against the Oakland Raiders. On this day, it was the Raiders strong defense that put an end to the Bills streak and season.

It was over when:
Trailing 6-14 with 1:16 left in the game, Buffalo was unable to keep Oakland off the score board to keep it to a one possession game. Raiders’ kicker Cody Parkey kicked through a 28 yard field goal to extend their lead to eleven.  The Bills would get the ball one last time hoping for some kind of spark on offense. However, those hopes were quickly dashed when Tyrod Taylor threw his third interception of the game.

Game Ball
The unsung hero of this game has to be Raiders HB Shane Wynn. Wynn was acquired by the Raiders late in the season for the sole purpose of kick returns and that signing paid off in this game. Following the Bills field goal try to cut the Raiders’ lead to a one point game, Wynn took the Bills kickoff from his own end zone, then cut towards the middle of the field, turned on the jets as he ran it to the left outside of the sidelines and all the way down for a 104 yard kickoff return.

Key Stat
Pressure, pressure and more pressure by the Raider defense gave Bills QB Tyrod Taylor all sorts of trouble. Taylor was never able to get comfortable in this game, which is evident by his three interceptions, and 48.2 completion percentage “I’m very proud of our defense.” Said Raiders head coach Max Farias “Our defense gave us that spark we needed to win tonight. We got turnovers when we needed them and stopped them on 3rd down at key moments. I’m very proud of those guys. We can enjoy it tonight, but we still have a lot of work to do to get to where we want to be.”

Up next:
With the Bills season over, they will get back home and cleanout their lockers as they get ready for next season.

The Raiders will now head out to Florida to take on the number one seeded Miami Dolphins.