Dawson comes through for 49ers 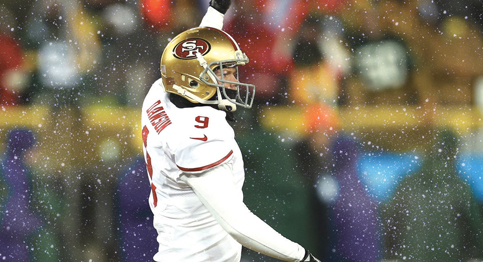 Green Bay, WI — The Green Bay Packers came into their game against the San Francisco 49ers as a heavy favorite to win and go on to their first NFC Championship game. They were, after all, the best team in the league with a record of 14-2, had a home record of 7-1 and were going up against a team with a road record of 3-5, the worst road record of the teams remaining in the playoffs. However, as good as those regular season stats sound, that’s all they are REGULAR season, these are the playoffs where home records, away records more often than not, go out the window.

Things started good for the Packers as they got on the board first, following an interception by Packers CB Sam Shields late in the first quarter. However, Packers kicker Mason Crosby missed the extra point, leaving the Packers with only six points on the board. That missed extra point would proof to be the difference in the game. The 49ers scored a touchdown late in the 2nd quarter, but their kicker Phil Dawson was able to knock through the extra point to give the 49ers a one point lead.

The Packers would get one more shot to get a lead. With 1:44 remaining in the game, the Packers were able to get the ball to the 49ers 16 yard line. On 4th and 7 Mason Crosby tried to give the Packers the lead with a 23 yard field goal attempt. Unfortunately for the Packers, Crosby once again missed the uprights.

Although it was Phil Dawson who gave the 49ers the point they needed to win, it is LE Arik Armstead who gets the game ball in this one. Armstead gave Rodgers all sorts of trouble throughout the game. The pressure caused Rodgers to have some missed throws and when all was set and done Armstead finished the night with 2 sacks and 3 tackles.

The 49ers did what they have done time and time again, take away their opponents running game. The Packers ran the ball just 9 times with Eddy Lacy, which made them one dimensional and caused Rodgers to throw 29 passes, which is the most since he threw 30 passes in week 14, when they suffered their second loss of the season.

The Packers are one and done after having such a great season. They’ll have plenty of time to think about this one and address some of the issues they had. They have proven to be a great regular season team, but in the playoffs they can’t seem to find their stride.

The 49ers will have a week to get ready to take on the second best team in the NFC, the two seeded Carolina Panthers.