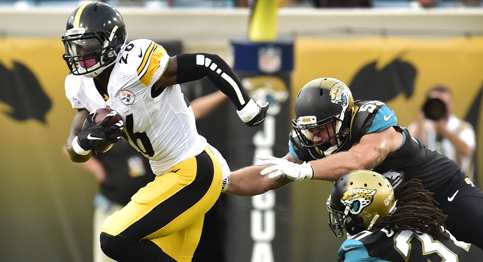 Jacksonville, FL – It wasn’t a good weekend for the state of Florida, as both of its teams lost this weekend. First the Miami Dolphins get taken out and now the Jacksonville Jaguars get eliminated by the Pittsburgh Steelers.

It was over when:
The Steelers got off to a great start, going up 14-3 in the first half but the Jaguars didn’t give up. With four minutes left in the game they put together an 83 yard drive to get into the end zone and after a successful two point conversion, the Jaguars trailed 14-11. On their next possession, the Steelers were able to score another touchdown, thanks to a 45 yard catch and run by TE Ladarius Green. Now down 21-11, the Jaguars could have simply given up and packed it in, but not these Jaguars. Blake Bortles drove his team down the field and with 48 seconds left in the game, he threw a touchdown pass to WR Rashad Greene Sr. and after the made extra point the deficit was once again at three points. With their season on the line, the Jaguars last hope at making a miracle comeback was to recover the onside kick. Punter Brad Nortman lined up to kick the ball, his kick sailed towards the sidelines and was picked up by the Steelers WR Markus Wheaton. With that, the Jaguars season came to an end and the Steelers hanged on to advance to the AFC Championship game.

Game Ball
Steelers CB William Gay had an outstanding game. The pressure he applied on wide receiver was key in the Steelers win, as he had multiple deflections and made critical hits that caused the Jaguars wide receivers to drop the ball. Gay had one interception, which was Bortles fifth of the game, that killed a drive late in the game. But, the biggest play he made and quite possibly a main reason for his teams win, was in the dying seconds of the first half. After the Steelers took a 14-3 lead with seven seconds in the quarter, Bortles was able to connect with his wide receiver Allen Robinson. Robinson broke away from two defenders and it looked like he was in the clear down the sidelines on his way to the end zone.  But, from all the way on the opposite side of the field Gay ran as fast as he could and just 3 yards from the end zone, Gay was able to bring down Robinson to stop what could have been a 75 yard touchdown.

“I thought [Robinson] was gone.” Said Steelers head coach “He was so far up the field I couldn’t really see. It wasn’t until I looked up at the screen that I see William run in and make the tackle. It was a hell of a play and a good example of this team’s never give up attitude.”

Key Stat
The Steelers and Jaguars combined for seven turn overs, five belonging to Blake Bortles. “No team is going to win many or any games when you turn the ball over that many times. That’s all on me.” Said Bortles.

Up Next
For the Jaguars it was their best season in franchise history. With key players locked up for a while, expect them to be a contender in the AFC for a couple of years.

With the fourth seeded Raiders taking down the number one seed and the three seeded Steelers taking care of the number two seed, it means that the Steelers will get a home game next week in the AFC Championship.