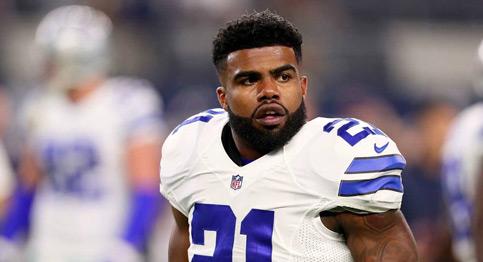 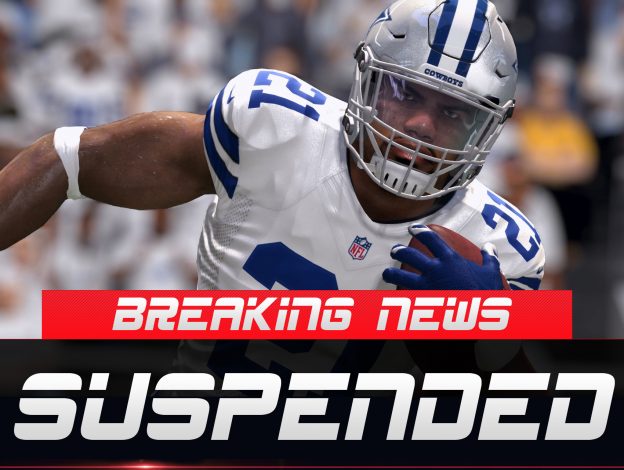 The ruling comes after the league’s year-long investigation into domestic violence accusations made against him by Tiffany Thompson, who identified herself as his former girlfriend to authorities.

Elliott, 22, has denied the allegations. The second-year pro and his representatives said in a statement they were “extremely disappointed” with the league’s decision and will appeal the ruling.

If the six-game suspension stands, Elliott would be eligible to make his season debut Oct. 29 against the Washington Redskins. He would miss games against the Giants, Broncos, Cardinals, Rams, Packers and 49ers.

The six-game ban stems solely from the league’s investigation into the domestic violence allegations made by Thompson in July 2016, a league source said. In a statement released by the league, Todd Jones, the league’s Special Counsel for Conduct, said independent advisers who reviewed the evidence gathered by the league “were of the view that there is substantial and persuasive evidence supporting a finding that [Elliott] engaged in physical violence against Ms. Thompson on multiple occasions during the week of July 16, 2016.”

In its letter to Elliott, the league stated it reviewed photographs taken by Thompson of her physical injuries following multiple incidents. The league found the “photographic and medical forensic evidence corroborates many critical elements of the allegations regarding the causes of her injuries.”

Ultimately, the decision to suspend Elliott was made by the league commissioner.

“… The commissioner carefully considered the issues raised by the [Players Association] on your behalf regarding witness credibility and alternative causation theories,” the league’s letter to Elliott stated. “However, in the commissioner’s judgment, there has been no persuasive evidence presented on your behalf with respect to how Ms. Thompson’s obvious injuries were incurred other than conjecture based on the presence of some of her bruising, which pre-dates your arrival in Columbus on July 16, 2016.”

Elliott and his representatives disputed the league’s conclusions. “The league’s findings are replete with factual inaccuracies and erroneous conclusions and it ‘cherry picks’ so called evidence to support its conclusion while ignoring other critical evidence,” they said in a statement.

Thompson told police Elliott assaulted her on five separate occasions over the course of a week in July 2016, according to the Columbus (Ohio) City Attorney’s Office. He was never arrested and prosecutors declined to charge Elliott, citing conflicting and inconsistent information.

Under the terms of the league’s personal conduct policy, players found by the league to have committed domestic violence are subject to “a baseline suspension without pay of six games” regardless of whether “the conduct does not result in a criminal conviction.”

The policy states: “In cases where a player is not charged with a crime, or is charged but not convicted, he may still be found to have violated the policy if the credible evidence establishes that he engaged in conduct prohibited by this personal conduct policy.”

Robert S. Tobias, principal assistant city attorney in Columbus, stated in an email to Pelissero last year he believed “there were a series of interactions between Mr. Elliott and [his accuser] where violence occurred.”

“… Given the totality of the circumstances, I could not firmly conclude exactly what happened,” Tobias wrote in October. “Saying something happened versus having sufficient evidence to criminally charge someone are two completely different things.”

The league launched its investigation soon after Thompson filed a police report last summer. League investigators first interviewed Elliott in October and met with him again last month. Elliott and the players association turned over phone records and documents related to the case to the league in May.

It wasn’t the only incident the league looked into involving Elliott, but events outside of the July 2016 domestic violence accusations did not factor into his suspension, a league source told Pelissero. Thompson called police on Elliott in Feb. 2016 in Florida, where the former Ohio State star was training prior to the Scouting Combine, sources with knowledge of the situation told Pelissero. She told police she suffered shoulder pain when Elliott pushed her up against a wall. Elliott wasn’t arrested or charged.

In March of this year, Elliott was seen in videos and photos pulling down a woman’s shirt and exposing her breast on the roof of a Dallas bar during a St. Patrick’s Day parade. Last month, Elliott was involved in an incident at another Dallas bar that initially sparked an assault investigation before police suspended their probe. That incident, however, was never part of the league’s completed probe, a source with knowledge of the investigation told Rapoport and Pelissero.

Elliott is entering his third season with the Cowboys after rushing for 1,703 yards and 23 touchdowns en route to earning his first league MVP.