Cowboys blowout Cardinals to advance to divisional round 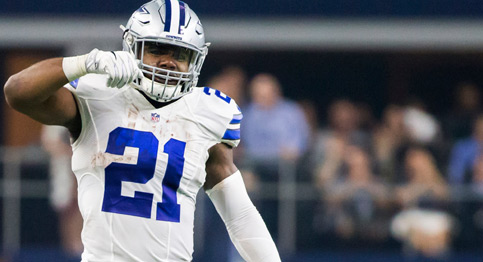 Arlington, TX – The Dallas Cowboys knew they had something special in Ezekiel Elliott, but even the Cowboys were taken by surprise as Elliot let loose and ran all over the Arizona Cardinals.

It was over when
With eleven seconds left in the 3rd and trailing by 14, the Cardinals were looking to their defense to make a stop to give their offense a shot at cutting the Cowboys lead. But instead their defense surrendered a fifty six rushing touchdown to Ezekiel Elliott. It was Elliott’s 3rd touchdown of the game and it absolutely killed any type of momentum the Cardinals had. Elliott would go on to score two more times as the Cowboys blew the Cardinals out of the building with a 17-45 win.

Game Ball
No surprise here, Ezekiel Elliott gets the game ball as he sets all kinds of records on this night.  Elliot becomes the first player and rookie to score 5 touchdowns in a playoff game. He set a league record for most yards in a playoff game with 283 yards. He also set a new record for the longest run in playoff history when he broke away with a 75 yard touchdown run. “It was a team effort tonight. I did what I did thanks to the guys up front” said Elliot “Without that line I wouldn’t be able to do my thing. It feels good to have a game like that, but can’t get to high on that. Our job is to win it all and next week we’ll be going against another good team.”

Key Stat
Arizona’s 6th ranked rushing defense was nowhere to be found on this night. Missed tackles, out of position and just overpowered is what cost them today. During the regular season the Cardinals were allowing 65 rushing yards per game, for them to allow 283 was a shocking turn of events.

Up next:
The Cardinals should be proud of the season they had. No one thought they would have a shot at the playoffs when the season started. If they can just get some help on defense, expect them to make some noise again next season.

The Cowboys will head out east next week to take on the second seeded Carolina Panthers.