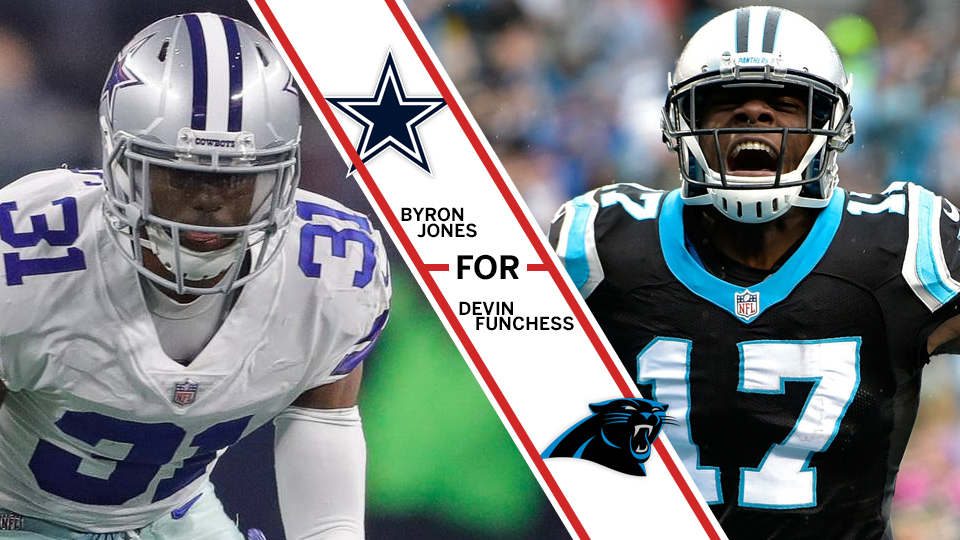 Charlotte N.C — In a bit of shocking news the Carolina Panthers have decided to trade 24 year old number one receiver Devin Funchess to the Dallas Cowboys for star Corner Byron Jones. It is an interesting move considering the Panthers offense looks lost at time and losing a big bodied receiver with great hands doesn’t seem like a good idea to help the offense, but they couldn’t pass on a chance to get a player like Jones, who is versatile and can play corner or can be moved to safety. Also with the age of some of the secondary players it’s a way to go younger at the position, with 37 year old SS Mike Adams up for contract Renewal the panthers can either slot Jones in SS next season or address the position during the draft. “I’ve always liked Byron” speaking to coach Miller after the news broke. “He is a talented athlete and I’m very excited to be adding him to our secondary, I’m expecting big things out of him, He’s a smart guy, so I don’t see us putting him on any snap count in this week’s upcoming game.”

The team certainly wouldn’t have entertained this trade unless they felt good about the other receivers on the team, led by Rookie D.J Moore, who has flashed potential even if there have been some bumps along the way, namely drops. They still have Vet Torrey Smith who the younger receivers can lean on and ask for advice and just learn from a professional on how to go about your business day in and day out. With Funchess out, the team will look to find ways to get the ball into the hands of some of its faster receivers in Curtis Samuel and Damiere Byrd, who flashed his speed on a Kickoff Return touchdown earlier in the year. Anytime you add more speed on the field it adds for more chances to exploit match ups and man to man coverage at times. We got a chance to talk to Moore after the trade. “I’m excited that the front office and coaching staff has enough confidence in me to step up become a top receiver on the team right away, it hurts to see Devin go, but it’s a business at the end of the day, and I’ll take what I learned from him and go from there. I’m going to have to work on the drops for sure if I’m going to grow into the go to guy on this team though.”

Through 6 games Moore has 8 drops on 24 targets, like he said, he’ll have to be better if this team is going to succeed and move forward as an offense. It sounds like they’re not done yet as they have added Dontari Poe onto the trade block to see what type of offers they can get for him, they really need a lineman to help Cam stay healthy for the entire season, he suffered 5 sacks last game, more games like that and they might be searching for a new QB!

Damiere Byrd showing his speed on a Kickoff Return touchdown