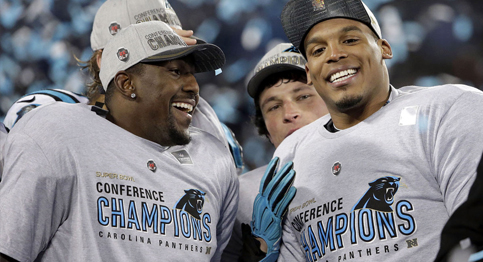 Charlotte, NC — The San Francisco 49ers came into this game trying to tie their longest road win streak of the season, which was two. Unfortunately for them, their dream of that and advancing to a second consecutive 2K OLF Super Bowl did not happen after getting eliminated by the Carolina Panthers.

This was a close game all the way down to the final play. The score was all tied up 10-10 with sixty eight seconds left in the game. Cam Newton and the Panthers were driving up the field looking to get into at least field goal range. On 2nd and 10 from the 49ers forty two yard line, Newton dropped back and tried to hit his receiver, Ted Ginn Jr, as he was cutting across the middle of the field. Instead, Newton was intercepted for a second time by 49ers CB Tramaine Brock.

The interception put the 49ers in great field position, on their own forty five yard line and with sixty two minutes left in the game, all they needed to do was get into field goal range. That plan however, quickly evaporated when Jimmy Garoppolo tried to throw a screen pass to his HB Jamaal Charles. The pass hit Charles in the back of the head, bounced up into the air and was picked off by Panthers CB Daryl Worley. The crowd erupted as Worley ran with the ball all the way for a 45 yard touchdown. Following the extra point by Panthers kicker Graham Gano, Carolina now had a seven point lead with just fifty five seconds left in the game.

The 49ers, like they have all season long, did not give up and on their next possession they were determine to get in the end zone to tie the game. Following an offensive holding and three plays later, the 49ers were staring at a 4th and 20 with thirty three seconds left. Garoppolo, out of the shotgun formation, dropped back and somehow managed to hit his WR Torrey Smith for a 27 yard gain to keep the drive alive. 49ers called their first time out with twenty six seconds left in the game. Two plays later, Garoppolo once again connected with Smith, this time for a twelve yard play to put the 49ers into enemy territory with thirteen seconds left, the 49ers immediately used their second time out. On the next play, the 49ers had five wide receivers out, Garoppolo scrambled out of the pocket to his left as time was winding down and once again he was able to find a receiver down the field. This time it was WR Vance McDonald who managed to catch the ball at the nine yard line and just as he was tackled the 49ers used their final time out with three seconds left in the game.

After that big gain, it all came down to one final play. Â The 49ers once again elected to go with five wide receivers, Garoppolo hiked the ball and stood in the pocket looking, hoping, for his go to guy in this game to get open. Garoppolo threw the ball to Smith as he was cutting across the middle of the field. The catch was made, but unfortunately Smith would be tackled two yard short of the end zone and with that the 49ers season came to an end.

The man that single handedly gave the Panthers the points they needed gets this game’s ball, CB Daryl Worley. “Man, I don’t even know what happen to be honest. I just remember my eyes lit up as that ball went up in the air. It was all in slow motion as the ball went up I just reached up and got it. After that I took off. I didn’t think anything but just score.” Said Worley “All I saw in front of me was a clear path, didn’t care to even look back behind me. Once I was in, I just heard the noise from the crowd and told the guys on the sideline, one more stop guys one more. Let’s go.”

The 49ers inability to convert on third downs was a key factor in tonight’s loss. They converted just one out of six times. One crucial non-conversion was on a third and six in the red zone. Garoppolo hit WR Torrey Smith seven yards deed, enough for a first down, but Smith was unable to hang on Â to the pass. The dropped pass set up a 4th down field goal try that was missed by kicker Phil Dawson.

For the 49ers it is the end of a great playoff run that goes back to last season, when they went all the way to 2K OLF Super Bowl VII. Now they will head home to the Bay Area and think about what might have been as they enter the offseason.

The Panthers are headed to Houston Texas to play in their first ever 2K Online Franchise Super Bowl.