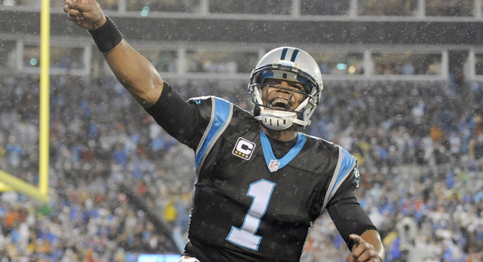 Charlotte, NC — Following last week’s impressive win, the Dallas Cowboys came into this divisional game against the Carolina Panthers with all the momentum on their side. But, early into this one whatever momentum they had was gone as they were unable to get anything going on offense.

Trailing 6-14 with 2:40 left in the half, the Cowboys found themselves in prime position to score a touchdown. It was 3rd and 13 on Carolina’s 13 yard line, Cowboys rookie QB Dak Prescott out of the shotgun was looking for a receiver. Jason Witten appeared to be open in the end zone; Prescott threw the ball and was picked off by FS Tre Boston. A few plays later the Panthers would capitalize off the interception to take a 6-20 lead.

The Cowboys got the ball back two more times after that and on the second drive; Prescott was intercepted again with 3 seconds left in the half. With time set to expire, the Panthers ran one last play. Cam Newton threw a hail marry into the end zone which was caught by WR Ted Ginn Jr. The touchdown and extra point gave the Panthers a 27 to 6 lead. The look on the Cowboys bench was one of disbelieve and with a young group it proved to be too much to overcome.

This could have gone either way, but Kelvin Benjamin gets the nod. Benjamin continued his dominant season by snagging 8 receptions for 203 yards and 2 touchdowns, which is a career best in the postseason for the young man. He made big play after big play, but none where bigger than his WR screen that turned into a 77 yard touchdown. He showed off not only his speed, but some shifty moves as well to avoid being taken down. “Cam made a nice call in the huddle; he noticed there was some cushion. After I got the ball in my hands, Ginn, and Brown made some great blocks and I just turned on the Jets.” said Benjamin talking about his long touchdown. “Yeah I had a great game, but this is just the beginning. This game doesn’t mean much if we don’t get that W next week, Cam is playing at an elite level and I’m ready for us to get to the big dance.”

The Cowboys running game was nowhere to be found in this game. Last week the league’s rookie MVP Ezekiel Elliott had a career game, but in this one he was completely underused. Elliott had just 9 attempts for 21 yards. The longest run he has was a 10 yard run. “We got away from our game plan and that all falls on me.” Said Cowboys head coach Andres Perez “Our plan was to keep control of the ball by running the ball, which then you hope opens up the passing game. But, instead I had our team trying to play shootout style football.”

The Cowboys go home to think about what might have been. Questions about Tony Romo will problably take center stage, until he is traded, retires or is confirmed to be back as the starting quarterback.

Meanwhile, the Panthers will stay put and get ready for their biggest test yet, the San Francisco 49erswill be their opponent in next week’s NFC Championship game.