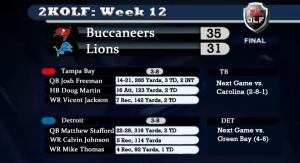 The Tampa Bay Bucs’ first game under newly hired head coach Mark Outten did not disappoint fans as it came down to the wire. Coach Outten in his introductory press conference mentioned that he wanted a defense hungry for the ball and while there is still plenty of work to do this was a great first step. Let’s get to the action shall we.

1ST QUARTER
The Lions won the opening coin toss and elected to receive the ball. QB Matthew Stafford caught the defense sleeping right out of the gate and connected with WR Mike Thomas on a 50 yard reception. That must have woken the defense up because on the next play they sacked Stafford causing a fumble and ultimately fell on it.

It was short lived success though as QB Josh Freeman threw a pick later on in the drive. The Lions got the ball back and marched down the field, ultimately connecting on a pass to WR Michael Williams for the touchdown.

To get Freeman to settle down the coaches called on heavy doses of HB Doug Martin. On a 1st and 10 from the 12 yard line Coach Outten dialed up a power run to the right. The offensive line blocked perfectly and Martin walked in untouched tieing up the ballgame.

Tampa’s defense came up big and after sacking Stafford yet again, forced a punt giving Martin and the offense the ball back. Noticing the defense playing a lot of zone Coach Outten decided to call a WR screen to WR Vincent Jackson. It was a great call as it led to a 35 yard touchdown.

The Lions had no intentions on going into half quietly though. After a couple of plays to move the ball down the field Stafford dropped back and was hit by a Buc’s linebacker bringing up a 3rd and very long. Well, they don’t call Calvin, Megatron for nothing. Stafford hit Calvin on a huge first down converting bomb which put the ball on the 3 yard line.

The Lions punched the ball into endzone and tied up the game 14-14. The Bucs had every intention with only :26 seconds left in the half to run out the clock but after a run by Martin put them at the 44 yard line they had no choice but to keep trying. A  HB screen was then taken to the house by Martin giving the Bucs the lead at halftime.

The Bucs received the ball to start the half but after a big hit by the Lions’ safety the Bucs found themselves on the defensive yet again. They held up strong though for Coach Outten and forced a field goal. However, it was the Lions defense’ turn to step up and they forced a punt. Stafford led a beautiful drive down the field dinking and dunking and finding every hole in the Tampa defense. The drive was capped off with a touchdown to WR Michael Williams.

Feeling the pressure Vincent Jackson walked into the offensive huddle and told Freeman to get him the ball. Freeman listened and mixed in passes to Jackson with runs to Martin  which proved to be effective as they took nearly half the quarter and ended up punching it in to take the lead 31-24.

Much to the dismay of Coach Outten who specializes in defense, the Bucs defense was served on a plate of crackers and Stafford once again picked it apart and led his team down the field for the go ahead touchdown with 2 minutes left. Feeling the pressure Josh Freeman overthrew a pass over the middle and it was picked off by the Lions’ secondary.

Coach Outten huddled his defense before they went back out and said, “Look, we have three timeouts. I need everything you got. Get our offense the ball back.” With that the defense held up on three consecutive plays and forced a punt with 1 minute left. After feeling like he had let the game slip away Freeman wanted redemption. Maybe it was the fact that they didn’t have any timeouts or there was only a minute left but he didn’t have time to think about his throws. He connected on a couple of mid range throws over the middle and hurried to the line as time was ticking down. Calling hike Josh read the defense and while he saw there was safety help over the top of WR Vincent Jackson he didn’t care. He trusted that Jackson and all 6’5″ of him would come down with the ball. As he let it go it felt like a shooter releasing a three point shot at the buzzer. It felt right and as Jackson came down under it and secured it all the way to the ground Freeman felt a rush of excitement overflow his body.

The Bucs defense did their job for the final :14 seconds in regulation and sealed Coach Outten’s first win.

After the game Coach Outten said that while he was happy with his team and more specifically the offense the defense had a lot of work to do.

*To watch the game in it’s entirety please click here.