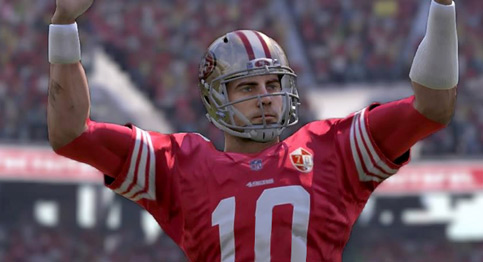 Santa Clara, CA – The Tampa Bay Buccaneers gave it all they had in their playoff debut, especially near the end of the game when it looked like they were down and out. But, when the dust settled it was the San Francisco 49ers who came away with the wild card win.

It was over when
With a 1:30 left in the game the 49ers took a sixteen point lead that appeared to be enough of a lead to call it a night. However, the young and hungry Buccaneers team did not roll over and give up. Following the late touchdown by the 49ers, on the very first play, Buccaneers quarterback Jameis Winston was able to connect with WR Jackson Griebel for a 75 yard touchdown pass. The Buccaneers were able to convert on the two point conversion to cut it to an eight point lead. Next up, the Buccaneers needed to recover the onside kick. They lined up as punter Bryan Anger kicked the onside kick, Anger kicked ball and a few bounces later the Buccaneers unbelievably recovered the onside kick with 1:22 left in the game.  Jameis Winston would once again come through for his team, this time on the fourth play of the drive. Winston was able to connect with WR Charone Peake for a 30 yard touchdown pass. Down by just two points now, the Buccaneers once again had to go for a 2 point conversion and once again they got it. The game was all tied up 30-30 and headed for overtime.

In Overtime the 49ers got the ball first and were able to move the ball up the field with ease. On 3rd down from the 1 yard line, 49ers FB Jerome Felton took a handoff to the left and managed to get in for the game winning touchdown.

Game Ball
49ers new quarterback Jimmy Garoppolo gets the game ball for this game. Garoppolo completed 27 of 36 passes, threw one touchdown, zero interceptions and finished the night with 305 yards passing. He also rushed for 5 yards on three attempts.

Key Stat
Without a doubt, the biggest surprise in this game was the lack of a running game from the Buccaneers league MVP Doug Martin. Martin led the league in rushing yards with 1,661 and was averaging 104 yards per game. The 49ers defense ranked 8th against the run, but in this game they played like a 1st ranked team.

Up next:
The 49ers will now go on the road to take on the best team in the league, they will take on the 14-2 Green Bay Packers.

The Buccaneers have a lot to look forward too next season. They made the playoffs, finished with a winning record, they have a new coach that looks to be the right guy for the job and just as important, they have a hungry young team that can’t wait for next season to start.