Bills vs 49ers a defensive showdown. 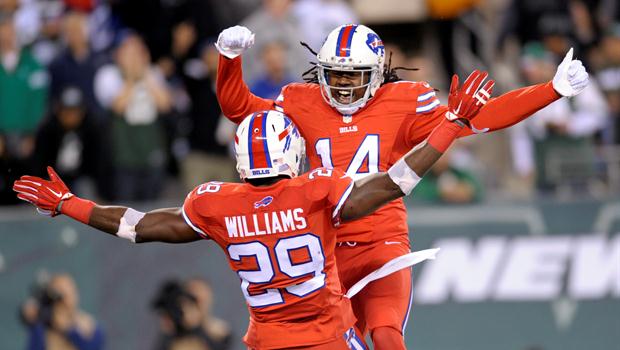 Buffalo, NY — For a game that only had 21 total points, Bills vs 49ers was one of the craziest games I have seen yet. Bills received the ball first and easily drove it down the field. Things were looking good for Buffalo until Taylor threw his first of three interceptions on a fade ball to Sammy Watkins. On the following drive, Taylor threw his second interception on a screen pass which went on and put the 49ers on the 4 yard line for an easy touchdown by Jamaal Charles. First half ends 7-0.

49ers received the ball to start the 2nd half and just like Bills at the start of the game, 49ers drove it down the field until Bills forced a fumbled at the 4 yard line! Marcell Dareus  recovers the fumble and returns it 86 yards for a touchdown. Yes, that’s right…at 331 pounds he returned it 86 yards for the score. The following drive Bills forced yet ANOTHER fumble at the 39 yard line. Kyle Williams recovered it and returned it all the way to the 12. That set up a 9 yard rushing touchdown by QB Tyrod Taylor to take the lead 14-7 with 1:50 remaining in the 3rd quarter.

The 49ers had plenty of time to tie the game up, & in face they did. Hunter caught a touchdown pass with 1:59 left in the game to tie it up 14-14… or did they? The fellas in New York said not so fast… with 2:00 left in the game only they can review the play and they did just that. Hunter was stopped at the 1 yard line. But that’s easy for the 49ers right? 1:28 to run it in for a 1 yard touchdown. The Bills defense said “I don’t think so”. Strong Safety Aaron Williams tackled Jamaal Charles for a 1 yard loss and that put the 49ers at the 2 yard line. 1:15 to go, Linebacker Humber stopped the fullback for no gain. Can the Buffalo defense do it? It’s 3rd & Goal on the 2 yard line with 45 seconds remaining, 49ers bounce it outside with Charles but MLB Zach Brown said “No sir” and went on to tackle Charles for a 7 yard loss. The Bills are really going to do this? 4th down ball on the 9. 15 seconds remain in the game & Garoppolo’s ball goes incomplete in the end zone. The Bills defense pulled this one out! But 49er’s still had 3 timeouts with 11 seconds remaining. Bills head coach Orellana decides to play it safe and takes a knee. This decision was questioned by many because Bills were forced to punt with 3 seconds left, but luckily for them they were able to stop the 49ers and end the game.

This game could have gone either way. Tyrod Taylor threw 3 interceptions, 49ers fumbled twice. All 21 points in this game were thanks to the turnovers… defense wins you games ladies & gentleman.

49ers  will meet another new head coach in Ryan Guttierrez next week when they play the Tampa Bay Buccaneers. Buffalo Bills have the toughest game of the season so far. They will travel to Miami to play the red-hot Miami Dolphins.