Bengals’ Adam Jones Suspended Without Pay For One Game 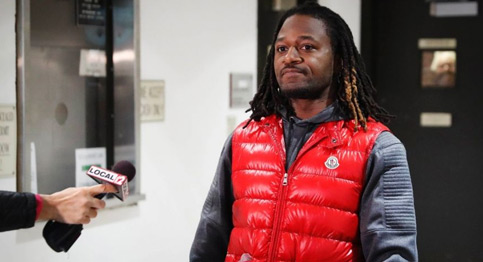 Cincinnati, OH —  Bengals cornerback Adam “Pacman” Jones has been suspended for the regular-season opener against Baltimore for his role in an altercation at a downtown hotel earlier this year.

Jones had pleaded guilty to a misdemeanor charge stemming from the January incident, the latest in a history of off-the-field legal issues for the league veteran. The league said Friday that the suspension was for a violation of its personal conduct policy.

Police said Jones kicked and used head-butting as he was arrested for allegedly assaulting a hotel employee. He was arrested outside the hotel, and police video showed him protesting that he hadn’t done anything to deserve it, loudly demanding, “Let me go!” and at times struggling with officers while yelling obscene insults. Video of Jones in the back of a police cruiser at one point showed him telling an officer: “I hope you die tomorrow.”

Jones apologized in court for his behavior and specifically to Cincinnati police Sgt. Jarrod Cotton. His attorneys said he had been receiving treatment, including for anger management.

In a letter to Jones, the league said it considered the “extensive video documentation of the tone, tenor and nature of your interactions with law enforcement at the site of your arrest, during transportation to the jail, and during the booking process. As you acknowledged, your post-arrest words and actions reflected poorly on you and your family, the Cincinnati Bengals football club, and the league.”

“While it is our understanding that appropriate apologies have been publicly extended, they do not completely negate your behavior and admission of culpability for the underlying conduct,” the league said.

Jones can appeal the suspension within three days. Otherwise, he will be eligible to return to the active roster on Sept. 11 following the opener against the Ravens. Jones may participate in all preseason practices and games.