2K Online Franchise > News > League News > A Late Pick Six by Dalton Caps off a Night to Forget for the Bengals Offense.

A Late Pick Six by Dalton Caps off a Night to Forget for the Bengals Offense. 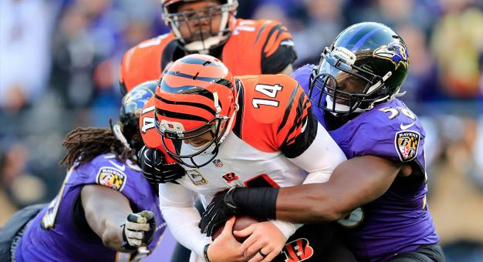 CINCINNATI, OH- Another week same story, Bengals lose another tight game in the final minutes 21-13 to division rival Baltimore. In what everyone was expecting to be a year where Andy Dalton picked up right where he left off from last year’s impressive campaign where he threw for over 3500 yards and 34 tds,  this year has been everything but impressive. 3 games in and Dalton has thrown for 730 yards 3 tds and 4 ints, with one of those interceptions being a game sealing pick six in the final minutes of this weeks game, compare that to last years first 3 games where he threw 5 tds to only 3 ints while throwing for nearly 800 yards. That is not what we were expecting this year, especially after signing free agent Jermaine Kearse.  We asked Dalton if he was perhaps hurt after having a strong showing in the preseason. “Absolutely not, my body feels great, where I’m hurting us is I’m not getting the ball out with confidence, so its not getting to the receivers quick enough and with enough velocity behind the pass I have to trust my instincts and trust my receivers.” It doesn’t help that yet again they cant rely on the running game and Hill is having another lackluster season. A season where he only has 109 yards 1 td through 3 games, that is just unacceptable and it will be interesting to see if the coaching staff toys around with the idea of getting the rookie Gilmore into the game to see how he does, and if he does do well maybe shop Hill around for some help or even some draft picks.  the defense is doing its best to keep them in the game, but is the offenses struggles of milking the clock and giving the defense a decent rest showing up at the end of the game? So far in all 3 games the opposing offenses seems to put everything together in the final quarter of the game and people seem to find themselves open more often.

Yes we have to do a better job and giving our defense a rest. We cant expect them to be able to play at an extremely high level in the fourth quarter when we keep having 3 and outs! Its just sickening when its late in the fourth and you have a chance to come away with a key first down and for whatever reason you come back for the ball and put yourself a yard short of the first down marker, when you should have just let the ball come to you a yard past the first down! Our players know better and they will definitely  be ready to play smart mistake free football next week.

Coach Miller referring to a key 3rd and 8 pass where Sanu came back in front of the first down marker to make the catch only to get tackled a yard short, where he could have easily let the ball come to him for an easy first down with the corner trailing behind him. If this team wants a chance to get back into this playoff race it has to start this week against another division rival game against the Steelers or are also 1-2. They are going to have to get some semblance of a run game going to alleviate the pressure on Dalton as well as give that defense a rest, so then can be somewhat fresh when the fourth quarter starts. Don’t count this team out yet, but if they end up losing this week and the Ravens win which would bring them to 4-0, they just might have to set their hopes on a wild card birth.

-So far in practice this week it seems that Sanu has lost his WR 2 designation. I saw Kearse lined up opposite of Green instead of occupying his previous slot designation. Will be interesting to see if this is a permanent switch or just tinkering.

-I am hearing rumors of a potential trade with the Patriots involving rookie LT – Cedric Ogbuehi for WR – Danny Amendola. If this is the case then it looks like Sanu might be in the dog house for the foreseeable future and pretty soon he might be finding his way out of Cincy with anymore mistakes.

-Coach Miller might be coaching for his job the rest of the way, I’m told by my sources they are hearing rumblings from upper management that they want this season turned around quick and they need too see this team make some noise in the playoffs.