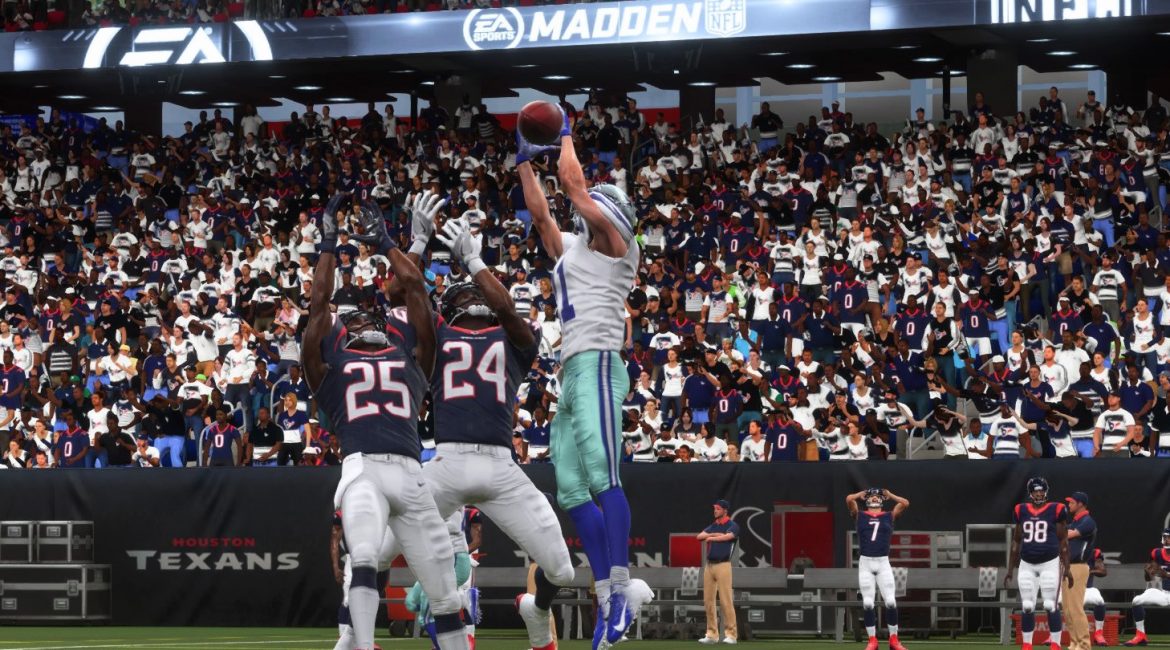 Houston, TX — There are moments that can turn a season around in a blink of an eye. On this night it was the Dallas Cowboys wide receiver, Cole Beasley who with a miracle catch just might have turned the Cowboys season around.

The Cowboys took on the Houston Texans for the first time since their week 16 match-up in Season 11. The game started off well for the Cowboys offense, Dak Prescott started the game by completing four of five passes for 41 yards and Ezekiel Elliott was moving the ball on the ground well with 4 rushes for 21 yards. The good ball movement was enough to get the Cowboys up the field for a late first quarter field goal by rookie kicker Brett Maher.

The Texans would try to answer back by trying to move the ball through the air on their next possession. Texans QB Deshaun Watson looked good as he moved the ball up the field, completing 4  out of 5 passes to get his team to the 32 yard line. But, on his sixth pass of the game he would be intercepted by Cowboys middle linebacker Jaylon Smith.

The Cowboys offense would again move the ball well. The biggest play came on a 3rd and 14 play from the Texans 44 yard line. Prescott, out of the shotgun, dropped back and held his ground (unlike previous weeks) and threw a deep ball up the right side of the field to wide receiver Terrance Williams. Williams, who leads the team in drops (10) made a huge catch to get the Cowboys down inside the 15-yard line. Prescott was hitting 80% of his passes, a good sign for Cowboys fans who haven’t had much to cheer for this season. The Texans however, held their ground and kept the Cowboys out of the end zone. The Cowboys would settle for another field goal to extend their lead 6-0.

The Texans had a chance to kick a field goal on their final possession of the first half. With eight second left the Texans had the ball at the 12-yard line and no time outs. Inexplicably, the Texans elected to try and score a touchdown. Watson on 3rd and 10 tried to find a receiver open, but the Cowboys defense stepped up and not only held the Texans out of the end-zone but had the smarts to not tackle Watsons and make him round around until time expired on the first half of the game.

The Cowboys began the second half the same way they started the first. They moved the ball through the air and on the ground, gaining yard after yard and eating valuable time off the clock. Unfortunately, all they would get out of it was another field goal. The Texans offense got to touch the ball for the first time in the third with 4:22 left. Cowboys time of possession was a staggering 17:52 to 7:50 for the Texans.

The lack of play time for the Texans was evident as Watson would be sacked on the 3rd play of their drive. Left End DeMarcus Lawrence dropped him for a loss of twelve, forcing the Texans to kick a punt from their own nine-yard line.

The Cowboys on the ensuing drive would again get the ball moving. Elliot would get his 17th carry of the game, which was his second highest number of attempts this season, to get the Cowboys down to the Texans 45-yard line. The Texans must of had enough of the Cowboys moving the ball so well, as they would finally make a stop by intercepting Prescott. Texans middle linebacker Dylan Cole would come up with the interception, his second of the season.

Following the interception, Watson was seeing yelling at his guys and whatever was said seemed to have worked. Three plays later, Watson threw a pass to his wide receiver DeAndre Hopkins who caught the ball on the left side of the field, avoided a badly attempted tackle by Cowboys CB Byron Jones, then out ran the rest of the Cowboys defense on his way to a touchdown with just seconds left in the 3rd quarter.

Following the touchdown, the Cowboys seemed a bit rattled. They weren’t moving the ball like they were earlier in the game and a few plays into their drive, Prescott was intercepted again. This time by strong safety Kareem Jackson.

Down by two and with 5:40 left in the game, the Texans had the ball at the Cowboys 31-yard line. A sure distance for their kicker Ka’imi Fairbairn. But, Watson would make a huge mistake by misreading the coverage. Watson tried to get a pass to his receiver Will Fuller, but that pass would end up getting picked off by CB Chidobe Awuzie, who lead the team with 4 interceptions. The interception gave the Cowboys the ball with just over five minutes left in the game.

The Cowboys this time, looked determined to get the ball moving again. For the most part they succeeded, as they would take three minutes off the clock, down to the two-minute warning. With 1:59 left, Prescott, on 3rd and 2, elected to audible out of a run and to a pass intended for TE Dalton Schultz. Prescott hiked the ball, rolled to the left, threw the pass, which bounced off the right shoulder of Schultz and into the hands of Dylan Cole.

Watson and the Texans knew all they needed was a field goal and the game would most likely be theirs. Watson did all he could, and with 59 seconds left in the game he managed to get his team into the red zone, down to the 14 yard line following a big play to his TE Jordan Akins. The Cowboys, who for most of the game looked to be in control, were once again staring down another disappointing loss. With two time outs used and a made field goal by Texans kicker  Giorgio Tavecchio the Cowboys would need a miracle to overcome the one point deficit.

The Cowboys began their final drive of the game on the 21-yard line. Prescott made a great throw to Cole Beasley up the right side of the field. The catch would of gotten the Cowboys to the 39 yard line. But, a holding penalty by left guard Connor Williams, not only negated the play but pushed the Cowboys back 10 yards with 26 seconds left in the game. So, with all odds against America’s team and a 0-5 start starring them straight in the face, the improbable finally occurred.

Prescott out of the shot gun, managed to get a Texans defender to jump offsides, which gave the Cowboys back five yards. Then on the next play, Prescott would audible for what seemed forever, the play clock was ticking down, with seven seconds left Prescott hiked the ball, and like he had done earlier in the game, didn’t panic, stayed in the pocket as long as he could, threw a pass up the field just as he was about to get hit. The desperation throw traveled up toward the middle of the field, there were three defenders in the area and it appeared the ball would be intercepted or simply knocked down. But, somehow, someway, the five foot eight, 180 pound Cole Beasley beat out SS five foot ten 185lbs Kareem Jackson and five foot eleven CB Johnathan Joseph. If that wasn’t crazy enough, Beasley still managed to get extra yards before finally being taken down at the Texans 29 yard line, with 15 seconds left the Cowboys used their final time out.

All the pressure then turned to the Cowboys rookie kicker, who had not missed a FG yet in this game. The Texans tried to ice him by using their second time out. But, Maher would not be intimidated as he kicked the biggest kick in his young career. The kick was up and good, giving the Cowboys a one-point lead with eleven seconds on the clock.
The Texans were unable to do anything with such little time, Watson tried a deep ball on the final play of the game but that was batted down to give the Cowboys a 12-10 road victory and their first of the season.
“I don’t even know what happen exactly.” said Cowboys coach Perez. “I was running through different plays in my head in case we got ball somewhat close to Maher’s kicking range. I think I was looking down at my play sheet when I hear the guys yelling ‘He caught it!! He caught it!!” I look up and imagine my surprise. I don’t even remember if I looked at the replay yet, I’ll have to look at it after this. The catch was obviously huge for us, but even more or just as impressive is the poise by our rookie kicker. I mean that last field goal was not an easy one to make. Especially on the road against this loud crowd. Hopefully we can grow from this and make this the start of something good.”

The 1-5 Cowboys will be back at home next week to take on Blake Bortles and the Jacksonville Jaguars. Meanwhile, the Houston Texans fall to 1-4 with the loss and they’ll remain at home next week as they take on the Buffalo Bills.