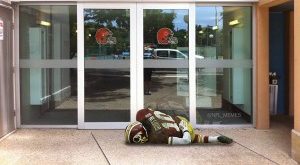 BEREA, OH – The Cleveland Browns made it in the news for the first time this offseason for something not bad happening involving a quarterback. As of around 11 am ET Thursday, Robert Griffin III is the newest name on the Browns long list of quarterbacks that they hope will work out.

Griffin, coming off a season of sitting on the pine in Washington under Kirk Cousins, was looked upon highly from the Browns coaching staff for his athletics and potential, especially after a year of rest from injuries and playing in general, but Griffin couldn’t avoid the injury bug for long.
While literally taking his first steps at the Browns training/practice facility, Griffin crumbled to the ground in front of Hue Jackson and Griffin’s agent. Lying in that all too familiar position, Griffin murmured under his breath.

Griffin was taken to the Cleveland Clinic t”where he was diagnosed with a partially torn ACL, reinjuring the same one he’s torn previously.
Many sources and players around the league think Griffin used this as a ploy, purposely injuring himself to avoid having to play for the Browns, but Griffin’s camp has denied such allegations, calling them,

No word yet on if the Browns will revoke their 2-year, 12 million dollar offer, but team owner Jimmy Haslam joking noted,

“We’ll bring it to him next time…”