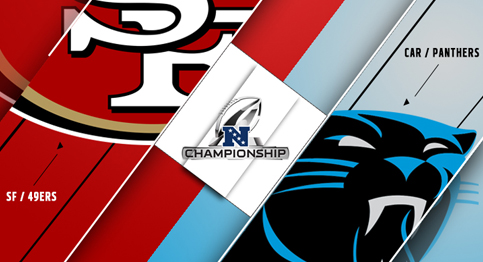 Charlotte, NC – The Carolina Panthers are in the NFC Championship for the first time since Season 5, thanks to their outstanding game last week on both sides of the ball. The Panthers are now just one win away from their first ever 2K Online Franchise Super Bowl appearance.

The San Francisco 49ers continue to defy the odds by winning close games and winning them on the road. They took down the best team in the league last week and before that they eliminated the Tampa Bay Buccaneers in a high scoring overtime game.

Streaks
Thanks to their win last week, the Panthers snapped their two game losing streak entering the playoffs.

The 49ers were one of the hottest teams entering the playoffs. They had one five in a row before the playoffs started and with two rounds in the books they are now on a seven game win streak.

Last time they met.
It wasn’t long ago that these two teams played each other. The 49ers took on the Panthers in week 2 of the regular season. The Panthers came away with an impressive win by beating the 49ers 14-28. Cam Newton had a perfect game that day, he completed 12 of 12 passes for 159 yards, threw one touchdown and zero interceptions.

Coach Nguyen knows there is no margin for error in this game. The Panthers will be their biggest test yet and if his team somehow comes away with the win, the 49ers will be the first NFC team to appear in 4 Super Bowls.

For coach Miller the time is now! All that separates him and a trip to the Super Bowl are the 49ers, a team he has already beaten this season. If he can get his team to an early lead, look for them to tighten up defensibly the rest of the game.