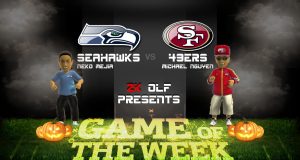 What a game that was on prime time thursday night football! It surely did live up to the hype that it was expected. How close was it you ask? Both teams ended up with 398 yards of offense. Turnovers would be the one statistic that would tell the tale, with the 49ers forcing 4 turnovers while the Seahawks forced 2.

Peyton manning struggled early as he forced two throws that would be intercepted by newly acquired  DeMeco Ryans. ” Those two interceptions really got us in the hole early, I am just glad our D played their A game today and helped me out” said manning.

Manning would then catch fire and ended the day with 14-20 for 336 yards 2td and 2 int. Also newly acquired starting QB Mike Vick played a solid game but had 3 of the 4 Seahawks turnovers. He would finish the day 15-20 286 yards 1td 2int and 4 rushes for 22 yards with a td and a fumble.

Vernon Davis made his presence felt today grabbing a team high 5 catches for 143 yard and 2 tds. “I felt like I could do whatever I wanted out there today. I found the holes in the zone, I got separation from man coverages. It was just one of those days where whatever play was called I was finding a way to get open and make plays for my team.”

Coach Mike Nguyen had a few words to say the next day at the 49ers training facility. ” I got a chance to watch the game over last night, it was what we all expected and hoped for. It was a very physical game, the ones where you have your chin straps on extra tight.

I’m really impressed with the way our Defense is playing the last couple games, we would fall behind and force our D to make it up and they have been answering every call.

We had vick for 2 INTs and a fumble and Donte Whitner made a nasty hit on Sidney Rice that made the ball come loose. Every divisional game is big to us, we will get to see them again at the end of the year in their house.

We will take a couple of days off then get right back to the drawing board for the Arizona Cardinals on Monday Night Football.”