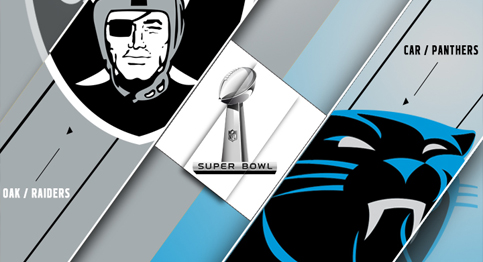 Houston, TX — The journey to 2K OLF Super Bowl VIII has been a long one for the Oakland Raiders. The Raiders came into this season with a chip on their shoulders following last season’s divisional loss to the New England Patriots. Coach Max Farias had his team ready from the start of the season and with the outstanding development of starting QB Derek Carr, the Raiders finished the season on top of the AFC West with a record of 10-6. Now, one home game and two impressive road victories later the silver and black are making their first 2K OLF Super Bowl appearance in franchise history.

On the other side of the field we have the two seeded Carolina Panthers. The Panthers, like the Raiders, were eliminated last season in the divisional round. Knowing they were close to making that big step forward, the Panthers went out and got a new head coach. Ex-Cincinnati Bengals head coach Mark Miller who was fired by the Bengals after just two seasons. The hiring has paid off tremendously, as coach Miller took the team to a 12-4, earning them a first round-bye and with the number one seeded Green Bay Packers out of the playoffs, the road to the Super Bowl went through Charlotte. The Panthers are now just one win away from football’s ultimate prize, the Lombardi trophy.

Streaks
The Raiders entered the playoffs on a one game losing streak, after losing to their division rivals, the Denver Broncos. Lucky for them that is the last time they lost. They have now won three in a row, beginning with a win in the wild card round against the Buffalo Bills, followed by a road win against the number one seeded Miami Dolphins, and lastly winning the  AFC Championship against the Pittsburgh Steelers.

The Panthers also entered the playoffs on a losing streak. They lost their week 16 game against the Atlanta Falcons and then lost the following week to the Tampa Bay Buccaneers. Good thing for the bye week as they had an extra week to prepare and re-energize. They took down the Dallas Cowboys in the divisional round then defeated the San Francisco 49ers in the NFC Championship.

Last time they met.
The Raiders and Panthers have met just two times in league history. Their last meeting was this season in week 12. It was an impressive defensive performance by the Panthers as they shutout Derek Carr and the Raiders in Oakland. Carr threw four interceptions while Cam Newton threw for 164 yards, one interception and one touchdown.

The first game between these two clubs was in week 8 of season 7. Cam Newton had a great game as he threw for 199 yards, two touchdowns, one interception, and ran for 28 yards. It was a closely played game that went down to the wire. With one second left in the game Panthers kicker, Graham Gano, kicked a 57 yard field goal to give the Panthers a 27-24 win.

This is it! Coach Farias has done it. Seventeen weeks and three playoff games later the Raiders are sixty minutes away from experiencing the joy of victory or the agony of defeat.

In his first season as head coach of the Panthers, coach Miller has elevated this team into the ultimate game. Now is the time for these two coaches and their teams to settle once and for all, who is the better team?